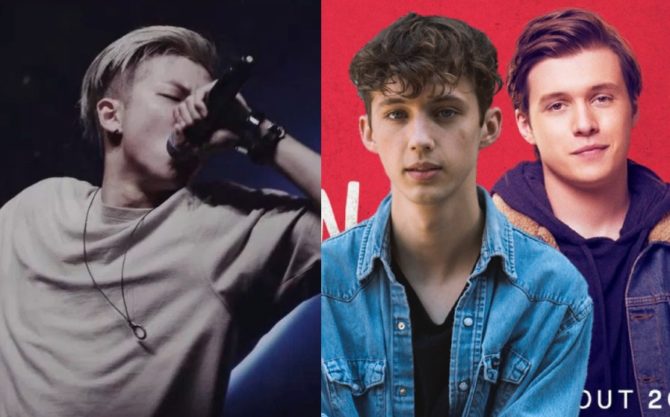 It doesn’t seem like much at first glance: The frontman of the wildly popular Korean boyband BTS tweeted a song recommendation to his 14 million followers.

The performer, who goes by RM (aka Kim Namjoon), included a screengrab of the song playing from his phone — Troye Sivan‘s “Strawberries & Cigarettes” off the Love, Simon soundtrack. “It’s great,” he wrote in Korean.

BTS, it’s worth mentioning, were the most tweeted about celebrities in 2017. Love, Simon, of course, is the recent Greg Berlanti-helmed teen rom-com with a gay protagonist, a mainstream first.

Add to that the fact that Troye Sivan is a young, openly gay pop star, and this confluence of acceptance was not lost on people.

The simple tweet has garnered over 670K likes and 265K comments.

“Not to be too dramatic about this,” one commenter wrote, “but namjoon openly supporting a gay song by a gay artist from a gay movie is uhhhhhhhhh Super F*cking Wonderful and really important.”

“Yasss we need more love and less hate in the world,” another commenter wrote.

“‘If u think namjoon sharing a gay song from a gay movie sung by a gay artist isn’t an iconic and political move, ur wrong,” said another.

Related: These tweets about ‘Love, Simon’ are going viral for all the right reasons

“My gay soul is shaking thank u legend,” added one particularly shook fan.

And as it turns out, the love is mutual.

Earlier this year, Sivan told an interviewer he’d love to work with BTS:

“That would be so fun. I fell way down watching all their music videos. They’ve been so nice to me since day one, so I just want to meet them and say thank you. It’s a world I’ve yet to fully delve into and understand, so I’m just completely curious about the whole thing.”

Among K-pop’s stars, open support for gay rights is still uncommon. For BTS to be as vocal as they are is hopefully setting a powerful trend.

In an interview with Billboard in February, the band’s support of Macklemore & Ryan Lewis’ gay-marriage anthem, “Same Love,” came up, to which the band said:

“It’s hard to find the right words. To reverse the words: Saying ‘same love’ is saying ‘love is the same,” they said, adding, “There’s nothing wrong. Everyone is equal.”

Listen to Sivan’s track from Love, Simon below: