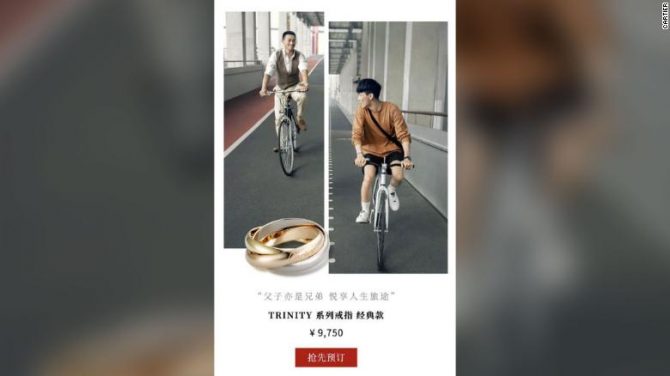 Famed jeweler Cartier has ignited a bizarre conversation over a new ad airing in China.

The commercial shows two men of similar age exchanging what appear to be commitment rings, yet advertisers claim the couple is actually father and son.

CNN reports the ad in question runs about 60 seconds, and was released to promote China’s Qixi Festival on August 25, the Chinese equivalent of Valentine’s Day.

The commercial shows both heterosexual and same-sex couples in romantic embraces exchanging rings. Text over the final moments of the ad reads, “How far would you go for love?”

Yet photographs from the ad captioned on the Chinese jewelry website Tmall specify that the same-sex couples have a platonic relationship.

“Mutual understanding beyond words. Witness our everlasting friendship,” the text under a shot of two women reads.

In images of two men together, the ad has even stranger captioning.

Cartier has also since released a statement clarifying that the two men are, indeed, father and son.

“Each [scene in the ad] tells the story of romantic, friendship, or family love … As such, one of the stories features the unique bond between a father and his son, enjoying a joyful and playful bike ride together, symbolizing the journey of life when there will be moments of parting ways,” the company said.

Even in China, where discussion of homosexuality remains something of a cultural taboo, the ad kicked off debate on the social media site Weibo, the Chinese equivalent of Twitter.

“They look three years apart in age at most. Also, I’ve never heard of fathers and sons wearing matching rings,” wrote one user.

“It’s weird to use a ring to explain the relationship between father and son,” said another, who also added that the couple was clearly meant to be a pair of gay lovers.

Homosexuality is legal in China, though discussion of the subject in the media remains difficult. Since 2016, censors have restricted discussion of “abnormal sexual behaviors” in films and television, making open discussion of LGBTQ issues or characters rare.

Queer activists have also criticized the ad for the cynical move of both including and excluding a gay couple.

“Some may believe [Cartier] is just trying to make some ‘pink dollars,’ but I’m inclined to be more positive in thinking that they are supporting gay rights in a way … by raising our visibility through this kind of ads,” Yanzi Peng, director of China Rainbow Media Awards said of the commercial. “Of course supporting gay rights will also bring these companies economic benefits — it is a win-win scenario.”
“Businesses should be more courageous and take another step forward,” Peng also added.
Maybe Cartier just wanted to bring new meaning to the term “daddy?”