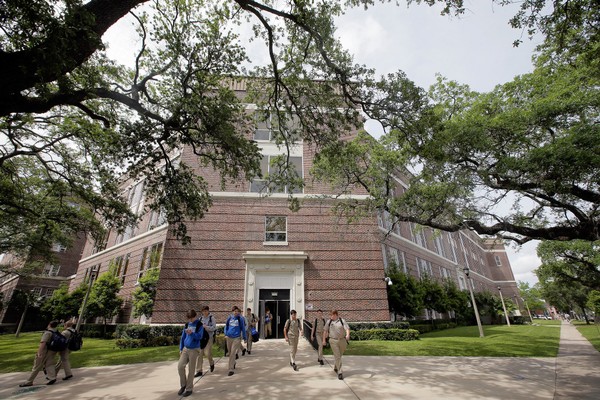 An elite boys school in New Orleans is currently fielding a PR nightmare and it doesn’t look like it’ll be ending any time soon.

On Wednesday, news broke that Jesuit High School in New Orleans quietly paid a former student $450,000 after he was repeatedly raped by priests and staff members.

Ricky Windmann was sexually assaulted over the course of several years while he was a student at the Catholic boys school in the 1970s. He detailed the horrific abuse in an article published by the New Orleans Advocate.

After that story broke, the school went into crisis mode.

Rev. Christopher Fronk, the president of Jesuit High School, immediately sent out a letter to the Jesuit community saying he was “horrified” by the sexual abuse that took place at the school and calling it a “disgusting time in our history”.

Except for that time in 2015 when esteemed Jesuit High School alum/volunteer speaker Mike Yenni groomed a 17-year-old boy at a graduation luncheon then proceeded to engage in an ongoing relationship with the teen that involved sexts, a meet up in a mall bathroom, and a $75 pair of underwear.

But maybe that was just an isolated incident?

“I assure you, we are all committed to the safety of everyone on campus,” Fronk said yesterday.

Then last night, local station FOX 8 broke another story involving another lawsuit against another priest at the school.

The priest was Donald Dickerson. The victim? An eighth-grade boy.

“The allegations involved the victim being sexually assaulted in a classroom at Jesuit High School,” attorney Feleshia Peavy tells FOX 8. “He fit right in and found an unsuspecting victim.”

In 2009, Jesuit settled a lawsuit with that victim. Then three years later, in 2012, Peavy found herself representing another victim who also claimed to have been abused by Dickerson.

Only this abuse didn’t happen at Jesuit High School in New Orleans.

You see, officials knew better than to keep him around the school, so they quietly shipped him down to Shreveport, Louisiana, hoping that would solve the problem.

“The allegations in Shreveport surfaced several years later and involved multiple victims, not in a classroom, but in a church he was assigned to,” says Peavy.

“He made his way into the family, approached the family, gained their confidence,” says Peavy.

Another settlement was reached, though Peavy wouldn’t divulge the exact amount other than to say it was large.

“When you understand that someone has proclivities and conducts themselves as a predator, you don’t shuttle them from assignment to assignment,” she says.

She adds the only way to remedy the problem is for the church to stop protecting abusive priests and instead send the cases to the criminal courts.

“Prosecutions are going to be the catalysts to help the church recognize this is serious,” she asserts.

In the meantime, in his message to the Jesuit community yesterday, Fronk assured people that “Jesuit continues to make a difference in the lives of our students, in the New Orleans community, and in our world.”