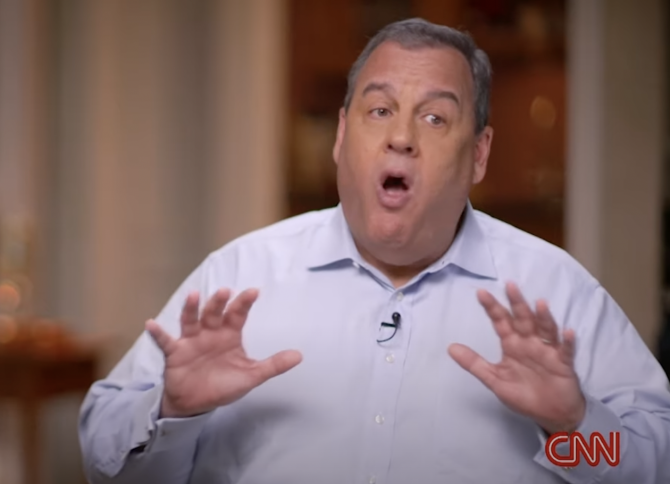 Speaking to CNN’s Dana Bash last night, Christie was asked about his weight. The former New Jersey Governor, who underwent lap-band surgery in 2013, said years of attacks over his size have made him “tougher” and that “after a while, you just learn to deal with it.”

“I could be talking about the Iran nuclear deal and I’ll get a response from somebody on email or Twitter or Facebook or wherever saying, ‘You fat S.O.B. You blah, blah, blah,'” he said. “I’m like, ‘Okay, well, what’s that have to do with the Iran nuclear deal?’ One of the amazing things to me–and like I said, I think it’s made me tougher–is that no one sees that as a problem.”

Christie went on to explain that if a person were to remark about, say, someone’s disability, people would be “appalled”. So why is his weight fair game? To which, we have only this to say:

To be clear: Christie is totally right. Attacking a person for their weight or any other part of their physical appearance is not OK. And, during his time as Governor of New Jersey, he did sign one of the toughest anti-bullying measures in the country, which is great.

But his words ring hollow when, for years, he’s given his buddy Donald Trump a pass every time he bullies a person for how they look.

Not only did Christie give Trump a pass, he endorsed him for president twice and helped him prepare for his debate with Joe Biden, who, as far as we know, has never mocked anyone’s weight or physical appearance in public.

Christie, who twice vetoed bills acknowledging the dignity of trans people by allowing them to correct their birth certificates, also told Bash that he wouldn’t take back his vote for Trump, even after that deadly January 6 insurrection.

“There’s a lot of people who have weight problems in this country and they look at me and they can relate to me in a different way than people who don’t,” he proclaimed.

Chris Christie attempting to play both ends against the middle and pretend to be a "Trump critic" is working about as well as his Weight Watchers diet.

He doesn't regret endorsing Trump. I hope his book bombs and the pages are used to line critter cages.

I don't agree with @GovChristie's politics but what he said about fatphobia is so spot on. That society today is so careful about how we refer to people or comment on their appearance, but it doesn't apply to fat people.

The media has not learned any lessons from the last 5 years, Fat ass Chris Christie enabled a bloated orange criminal to ruin this country. Now they are giving him free coverage so he can try to save his image. https://t.co/dfkxljODHY

Chris Christie was a Trump supporter until his fat ass caught Covid then he tried to act all morally superior; he’s full of shit, and so are these thirsty cable news stations ????

Somebody needs to tell that fat Chris Christie that we all know he supported tRump at the very beginning. So we ALL question his judgment. Hell, all he can do is close bridges. He’s no leader.

I hate Chris Christie and I hate fat shaming. But his eating must be emotional for him to fluctuate the way he does, so I wonder if he’s sought help for that, instead of constantly trying to make a spectacle of himself. He has the resources and the time.