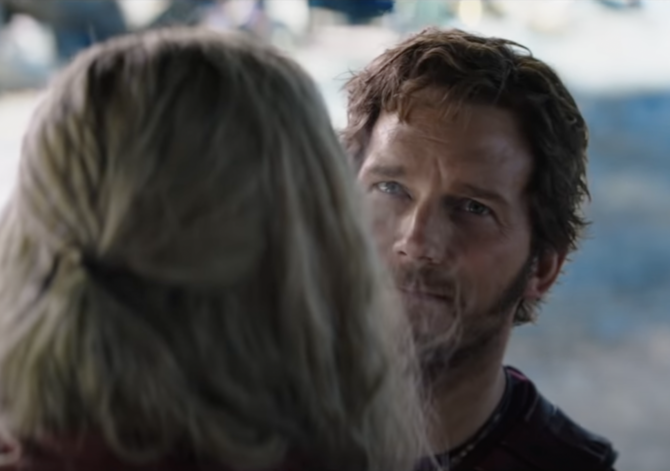 Chris Pratt’s week is off to an awkward start.

The new trailer for Thor: Love & Thunder just dropped and everyone’s talking about how his character, Star-Lord, has the hots for Thor, played by Chris Hemsworth. The film is directed by Taika Waititi and hits theaters this summer.

Quick backstory: Star-Lord was revealed to be in a polyamorous bisexual relationship in a 2020 issue of the Guardians of the Galaxy comic. At that point, Pratt, a longtime member of the anti-LGBTQ Christian cult Hillsong Church, had already played the character in the first two Guardians of the Galaxy films in 2014 and 2017, as well as Avengers: Infinity War in 2018 and Avengers: Endgame in 2019.

Hillsong Church was founded by accused child sex predator Frank Houston. Its doctrine believes homosexuality is a sin and conversion therapy is the only way to save gay people from going to hell. Pratt has belonged to the megachurch for several years and has denied it hates queer people despite the fact that it very clearly does.

Some people questioned whether he would return to the franchise after learning his character was bisexual. But apparently he was able to put his staunch religious beliefs aside for the sake of art.

Here’s how people are responding to the new Thor: Love & Thunder trailer…

chris pratt after taika waititi told him he had to do subtley gay scenes with chris hemsworth: pic.twitter.com/qOdkSp1ucd

marvel trying to restore chris pratt's image by making him gaybait with thor is the worst form of punishment that i can think of. the most annoying fanbase in the world is gonna have him bottoming for thor on ao3 for years to come. my condolences.

chris pratt fell to the ground and started hyperventilating and vomiting after filming this scene https://t.co/Bp46NNhR8m

chris pratt when he saw they have made starlord canon bi in the comic and taika was directing his next mcu movie pic.twitter.com/7se3TqIRxK

taika: starlord and thor are gay for each other

Watch the trailer for Thor: Love & Thunder below.