The thing about Minions is: They’re everywhere.

No matter which corner of the internet you lurk on, you’re sure to find memes of the silly little yellow creatures—they’re used for earnest Facebook posts, ironic Twitter reactions, and they’ve even inspired a new TikTok trend where Gen Z users dress to the nines to go catch Minions: The Rise Of Gru on the big screen.

So, it should come as no surprise that, yes, even conservatives lay claim to the Minions, using the googly-eyed henchmen for their own memes and nefarious purposes.

At least that’s what’s happening over on YouTube, where the trolling video editor know as “Yellow Flash” has decided, one, that Minions are some kind of emblem of conservative ideology and, two, their recent box office success is making the “woke” left “furious.” Um, sure?

We’re embedding the video below for posterity’s sake, but we strongly suggest you don’t watch, lest the inanity of Yellow Flash’s musings turns your brain to mush and has you speaking gibberish just like the Minions.

Somehow, this is all Lightyear‘s fault. As we’ve reported, the recent Pixar film’s inclusion of a (very brief) same-sex kiss has conservatives in a tizzy, and some—like Yellow Flash—have tried to paint the tepid box office for the Toy Story spin-off as an indicator that audiences are rejecting “woke Hollywood.”

Enter Minions: The Rise Of Gru, the sequel to a spin-off that’s also technically the prequel to 2010’s Despicable Me, the animated family film that first introduced the world to Minions. Over the long weekend, the movie posted box offices earnings of $125.1 million—making it the highest-grossing 4th of July weekend debut in history.

That’s a pretty astounding success, but it’s one that Yellow Flash’s video confusingly chalks up to the fact that apparently Minions are “anti-woke?” And that’s why so-called left-leaning media critics hate them?

Related: Of course conservatives are losing it over Disney’s Baymax, healthcare robot and queer ally

The video editor cites a small handful of critics that panned the Minions sequel but praised Lightyear as irrefutable proof of this, but the argument doesn’t hold water. All you have to do is visit RottenTomatoes to see that the films have roughly the same “Tomatometer” score (Minions at 73%, Lightyear at 75%)—the difference is barely discernible. In other words, the assertion that one movie is a ghoulish product that the liberal media is cramming down our throats, while the other is some sort of folk hero to the masses is quite the stretch.

And don’t get us started about the fact that Minions are canonically genderless beings who love to get dressed up in drag. Conservatives think drag queens are too difficult to explain to kids, but for some reason this isn’t? 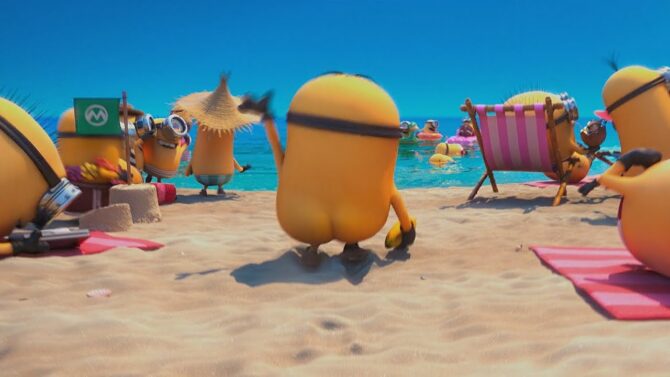 Ironically, if you’ve paid any attention to the Despicable Me franchise at all, you know that Minions are creatures that have been around since the beginning of Earth, and that they are “biologically wired” to seek out and serve villains.  So, step aside Gru, it looks like Yellow Flash is the latest swindler to exploit these helpless characters for his own agenda.

Here’s what the internet has to say about the right-wing’s confusing embrace of “anti-woke” Minions:

Being a right wing weirdo rules because you don't have to be attached to reality at all to win online. You can claim it as a huge victory for your side that the second Minions movie made slightly less than the first one, because imaginary woke people hate it or whatever pic.twitter.com/h7kGemp816

this guy's gonna drop his jaw when he sees the passionate gay 10 minute minion sex scene where all the minions come out in leather in celebration of pride pic.twitter.com/QuokAtIwft