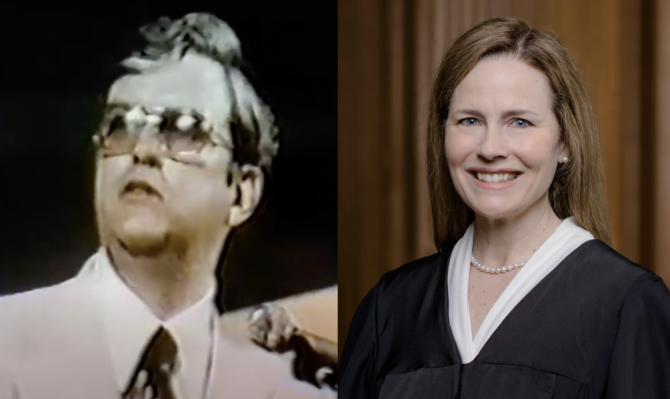 Justice Amy Coney Barrett has been the subject of quite a bit of online chatter this week after The Guardian published a bombshell report on Monday about People of Praise, a Christian cult where she once served as a  female leader.

People of Praise was founded in South Bend, Indiana in 1971 by Kevin Ranaghan and purports to be “a charismatic Christian community” that “provides a natural support for marriages and families.” In reality, it’s an anti-woman, anti-LGBTQ, anti-anything-not-Christian cult that has been psychologically torturing people for the last 50+ years.

We did a little digging and found a creepy video of Ranaghan speaking at the 1977 Kansas City Charismatic Renewal Conference that was uploaded to YouTube three years ago.

According to the video’s description:

In 1977, 50,000 Charismatics came together from different denominations in one of the largest interdenominational conferences ever held. One of the significant things about this event is that 25,000 of those in attendance were Catholic.

Ranaghan, who can be heard beginning around the 2:30 mark, was one of a dozen or so religious leaders who spoke at the gathering.

The then-37-year-old gave a sermon about how Christians of all dominations must band together so that “the whole church, in every corner, in every congregation, in every assembly may be thoroughly and totally filled with the spirit and equipped with every spiritual grace and gift needed to be the body of Christ in an effective, world-changing way.”

When it comes to LGBTQ people, the group believes homosexuality is a sin and gay marriage is evil. Members who admit to engaging in any sort of homosexual activity are immediately expelled, and children with same-gender parents are banned from attending the group’s schools.

A 1980 article from National Catholic Reporter quoted over a dozen ex-members who accused Ranaghan of “brainwashing” and creating a “siege mentality” in their community. They also reported being directed to sell their homes, stockpile six months of food, and engage in “survival drills.” One man said he was forbidden from buying a car with the “luxury” of air conditioning after his old vehicle broke down.

According to the The Guardian’s report this week, he allegedly showered with two of his daughters, ages 10 or 11 years at the time, and he and his wife, Dorothy, would perform “sexual displays” in front of other people, including kids, in their TV room. He also kept tight control over women’s personal lives.

One ex-member is quoted saying, “When I was part of the People of Praise I was in full life submission to Kevin Ranaghan, under full obedience to him and he exercised this authority over most areas of my life… Kevin Ranaghan controlled my dating relationships, deciding who and when I should date.

Related: Marsha Blackburn has some thoughts about Amy Coney Barrett’s cult and we’re all a little dumber now

In response to this week’s bombshell report, People of Praise issued a statement saying, “Since 1967 Kevin and Dorothy Ranaghan have been known and respected for their tireless work sharing the free gift of the Holy Spirit with hundreds of thousands of people around the world. We are proud that they are members and leaders of the People of Praise.”

The group has also been directing media to a statement it made to The Washington Free Beacon in 2020 when it denied allegations of physical or mental abuse and said “charges of the mistreatment of women, insularity, lack of privacy and shunning are contradictory to our beliefs and our practices as a community.”

So far, Barrett, who lived in the Ranaghan’s home for two years in the mid-90s, hasn’t commented on her involvement with People of Praise.