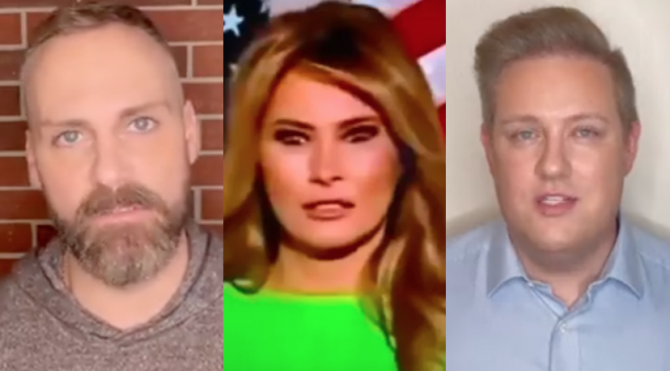 The Log Cabin Republicans want you to know: They’re “not so sure where [Melania Trump] got her passion for equality, but it was there. And it was real.” Who are they trying to convince there?

The line comes with the kind of dead-eyed, listless delivery one might expect from a three-minute video celebrating the former First Lady as a “champion and inspiration” to the LGBTQ community.

The cognitive dissonance may as well be satire except that… it isn’t.

The video was produced to accompany an award the LGBTQ Republican organization presented Melania with over the weekend at Mar-a-Lago — the “Spirit of Lincoln Award.” Because if there’s one thing Abraham Lincoln was known for, it’s that he had “I really don’t care, do you?” stitched to the brim of his stovepipe hat.

In a statement announcing the award in September, the group explained its decision. In part, it read:

“In the heat of the presidential election last year, the First Lady passionately reiterated her husband’s commitment to LGBT Americans, supported diversity of thought, and made clear that we are welcome members of the Republican Party, a historic moment not just for LGBT conservatives but for the history of the GOP.

“​​Melania Trump’s acceptance to be the guest of honor at the Spirit of Lincoln Gala even after she has left the White House only reaffirms her unwavering support for the LGBT community.”

The reference to Melania reiterating her husbands’s commitment to LGBT Americans is presumably a reference to her making a video last year for fellow gay GOP group, Outspoken, in which she criticized “cancel culture mobs” and anyone who thought her husband anti-gay.

“Nothing could be further from the truth,” she said in the video. “As leader of the Republican Party and (as) president of the United States, Donald has been clear that gays and lesbians will be treated as he has always treated them: equally.”

During his time in office, advocacy organization GLAAD kept a record of Donald Trump’s attacks on LGBTQ Americans. It came to more than 180 by the time he left office and included such actions as attempting to ban trans people from serving in the military.

Be best and watch below:

Last night, Log Cabin Republicans presented First Lady @MELANIATRUMP with our annual Spirit of Lincoln Award at Mar-a-Lago for her dedication to our principles.

Watch LGBT conservatives explain why the First Lady is a champion and inspiration to our community.