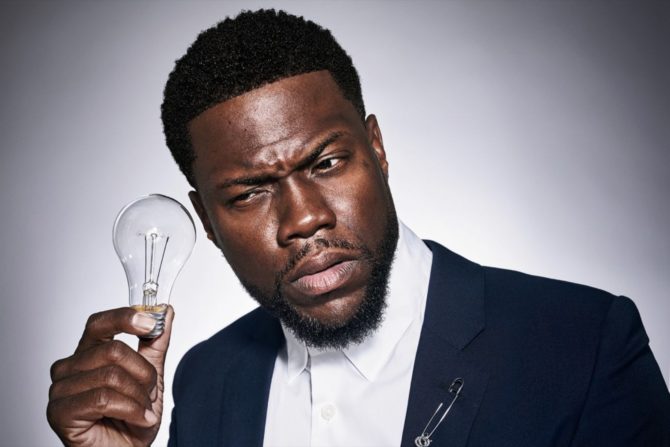 “When is an apology enough?” Sonny Hostin asked on the December 7 edition of The View. The co-host’s question echoed the one posed by fill-in moderator Joy Behar at the start of the segment discussing the Kevin Hart Oscar controversy.

Who would have guessed the voice of reason would be a “conservative” one?

“My biggest issue was his non-apology apology,” Abby Huntsman said. “Why not use this as a platform to go out there and speak to one of the biggest audiences you have in the year on television?”

It’s so lazy to blame “mob mentality” (as Hostin did) and our allowing social media “to dictate how we feel about people’s character” (as Wild ‘N Out host Nick Cannon did while publicly supporting his BFF Hart) every time the masses call out anything.

Social media can be nasty and merciless, but outrage doesn’t conveniently become a bandwagon sport just because you don’t agree with it. Hart’s homophobic history never might have resurfaced had the Academy of Motion Picture Arts and Sciences not hired him to host the entertainment industry’s second-gayest black-tie event after the Tony Awards.

As Huntsman astutely pointed out, he’d never actually apologized prior to getting the gig. Nor had he demonstrated the growth Hostin credited to him. To answer her question: All the apologies in the world are meaningless without actions to back them up.

I can’t speak for the way the “mob” behaves when calling out people like Hart, his fellow comedian Tracey Morgan, MSNBC’s Joy Reid, rappers Eminem, Nicki Minaj, and Offset, and baseball major leaguers Trea Turner, Sean Newcomb, and Josh Hader for homophobic tweets, jokes, and lyrics. I don’t support demonizing these people and trolling them on social media. Everyone says and does dumb things, and everyone deserves the opportunity to make amends.

For Hart, “I’m sorry” only came after he gave up the Oscar post. Pointing out that he no longer includes homophobic content in his work because “It can throw you under the bus,” as he did in a 2014 interview on Conversations with Ed Gordon, wasn’t an apology. It was so Megan “I’ve never been a PC kind of person” Kelly, making his regret all about someone else’s rules.

I'm sorry that I hurt people.. I am evolving and want to continue to do so. My goal is to bring people together not tear us apart. Much love & appreciation to the Academy. I hope we can meet again.

Even when apologies are straightforward and sincere, the sinners, not the sinned-against, are responsible for their own redemption. It’s a process that commences with contrition and not something granted as a result of it. Like Hart, comedian Sarah Silverman has taken the “my bad” route over past gay jokes, but she didn’t make it all about protecting her career.

“All I can do is learn from it, be changed forever by it, and do what I can to make it right going forward,” she recently told The Guardian.

Time will tell if she backs up her words with actions.

Hart didn’t. As recently as 2015, he and Will Ferrell were dropping gay stereotypes in the movie Get Hard. Then after the Oscar controversy boiled over, rather than respectfully addressing the issue the way he probably would expect a supposedly recovered racist to atone for his sins for the second, or umpteenth, time, if necessary, he basically told his detractors to get a life in two Instagram videos.

The apology he ultimately offered on Twitter after refusing to do so twice on Instagram felt meaningless because he made it under duress. He’s had nearly a decade to, in Silverman’s words, make it right, and he squandered the opportunity.

Hart and his fellow celebrities claiming contrition only after facing the firing squad should take some cues from a once-highly unlikely source: U.S. Senator Orrin Hatch (Rep-Utah). In the 1970s, the politician was comparing gays to neo-Nazis.

To my knowledge, he never apologized for his terrible math, but in his own way, Hatch took a huge step toward making it right last June when he honored Pride Month with a 10-minute speech on the floor of the U.S. Senate.

“LGBT youth deserve our unwavering love and support,” Hatch, 84, said. “They deserve our validation and the assurance that not only is there a place for them in this society, but that it is far better off because of them.”

He continued: “These young people need us — and we desperately need them. We need their light to illuminate the richness and diversity of God’s creations. We need the grace, beauty, and brilliance they bring to the world.”

It took him more than 40 years to get there, but better late in life than never.

HATCH on #PrideMonth : The LGBT community deserves our unwavering love and support, and the assurance that not only is there a place for them in this society, but that it is far better off because of them. #utpol pic.twitter.com/tAL1F3xSUc

Perhaps Hart just needs more time, though, hopefully, it will take less than four decades. Gays may not suffer homophobia gladly, but we’re more forgiving than many give us credit for being. “If you choose not to believe me then that’s on you,” Hart wrote alongside his first Instagram post calling out his foes for being “negative.” I haven’t given up on Hart — and I presume the LBGTQ community hasn’t either — but whether our public opinion swings in his favor in the future is on him, not on us.

The apology is but a start. Let’s see if he uses his huge platform to begin spreading a pro-LGBTQ message the way the likes of Kanye West, Jay-Z, and even Nick Cannon have (the latter’s recent blaming the offended notwithstanding). Hart’s audience might not be as prestigious as the U.S. Senate, but it’s considerably larger. He may have had to forfeit the Oscar gig, but judging from his record-breaking Australian performances amid the controversy, his star power remains undimmed.

Hart for Oscar host in 2020? If he plays it right in 2019, it will be a far more palatable option than four more years of President Donald Trump.

back on track
8 comments