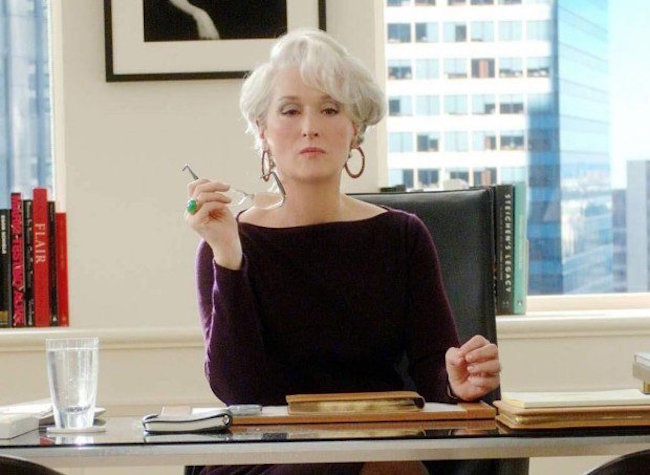 Since the publication of The Devil Wears Prada and its subsequent 2006 film, Miranda Priestly has been pop cultural shorthand for ice queen fashion scion, particularly if you happen to be employed by Anna Wintour and therefore can’t invoke her name lest you crisply be told to collect your things.

Unrelated: Don’t Be That Gay: The 10 Most Obnoxious Types Of Homosexual Men

But Priestly’s entire character would’ve been drastically changed if producers had ultimately decided to include these few precious seconds of footage that instead wound up on the cutting room floor.

Buzzfeed‘s Spencer Althouse recently posted this extended version of one of the film’s first big set pieces, which finds Andy Sachs (played by Anne Hathaway) and Emily Charlton (Emily Blunt) giving out names and backgrounds on all the people Priestly (Meryl Streep) would be hobnobbing with throughout the night.

But in this version, Priestly (gulp) seems to have something vaguely approximating a heart.

I'm just seeing this deleted scene from The Devil Wears Prada for the first time, and honestly it changed the whole movie for me pic.twitter.com/6Zkr6UxHQO

As Refinery29 points out, Twitter is positively spinning from the ramifications of all this:

We’re so very sorry for having shattered your world.