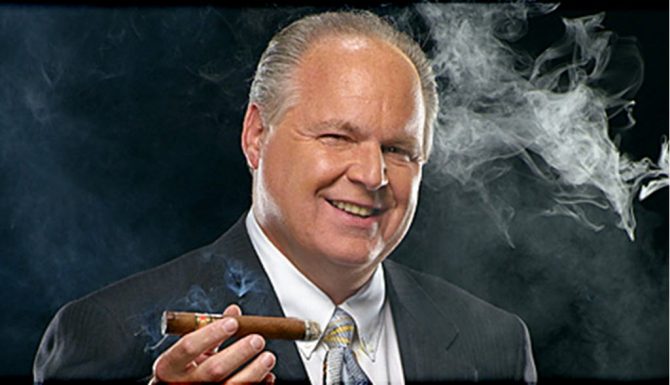 Conservative talk radio host Rush Limbaugh announced on his show this week that he’s been diagnosed with advanced lung cancer.

The 69-year-old, cigar-smoking hothead said he’s been receiving treatment for the cancer since January 20, though he did not provide many additional details. “There are going to be days that I’m not going to be able to be here,” he told listeners.

Here's the audio of Rush Limbaugh announcing on his show that he has lung cancer. pic.twitter.com/V60pAOpf68

In the past, Limbaugh has said he deserves “a medal for smoking cigars” and has frequently downplayed the dangers of smoking.

In 2015, he denied second-hand smoke posed any threat.

“That is a myth,” he said on his radio show. “That has been disproven at the World Health Organization and the report was suppressed.”

“There is no fatality whatsoever. There’s no even major sickness component associated with secondhand smoke. It may irritate you, and you may not like it, but it will not make you sick, and it will not kill you.”

Related: Rush Limbaugh: Left Will “Normalize” Pedophilia Like It Did Gay Marriage

He also falsely claimed that it takes at least half a century for smokers to develop lung cancer.

“Firsthand smoke takes 50 years to kill people, if it does,” he boasted. “Not everybody that smokes gets cancer. Now, it’s true that everybody who smokes dies, but so does everyone who eats carrots.”

I remember when Rush Limbaugh,laughed & joked about Eric Garner not being able to breathe. Rush ridiculed & mocked Michael J. Fox, for having Parkinson’s and laughed about Ruth Bader Ginsburg’s cancer. Maybe now Rush will feel and show empathy for others! At least I hope so!

Having lost my father to advanced lung cancer nearly 9 years ago, I have nothing but best wishes for #RushLimbaugh. Not a moment for politics.

I hope Rush Limbaugh gets the best medical treatment and recovers quickly.

And I hope that while he is doing it he thinks about why he doesn’t think poor people deserve the same thing.

Rush Limbaugh once happily chimed about “I CAN breathe because I follow the law” regarding Eric Garner.

How’s that working out for you now champ?

It’s SICKENING to see liberals on Twitter celebrating the fact that Rush Limbaugh has cancer.

They can’t put politics aside for a man dealing with one of the most brutal diseases.

As a survivor of cancer, I am appalled and disgusted.

We need to pray for Rush, not spite him!

Conservatives will spend all day spouting bigotry and hatred toward queer people, immigrants, and people of color, but as soon as you say something rude about Rush Limbaugh they tell you to be compassionate and quote the bible at you.

I take no pleasure in Rush Limbaugh's diagnosis like he did with mocking Michael J. Fox or Ruth Bader Ginsberg in theirs-I will just say, it's a good reminder about how important clean living is.

Rush Limbaugh has spent decades pushing a horrid agenda that he knew was ruining numerous lives, and getting people killed.

He deserves proper medical treatment for his lung cancer. Not going to root for him to die. But I really don't give a shit what happens to him. Sorry.

I wouldn't wish cancer on anyone.

But I would wish Rush Limbaugh's healthcare coverage on everyone.

There would not be a conservative media without Rush Limbaugh.

Related: Elton John Reveals The Reason For His Controversial Relationship With Rush Limbaugh