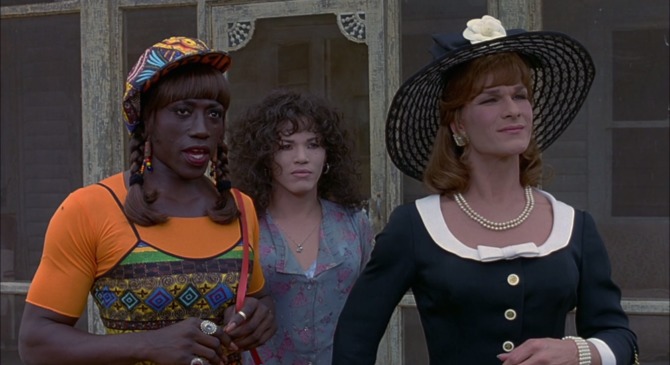 Shout! Factory, the film distribution company that specializes in decked-out releases for cult films, has just announced its slate for this June. The company will celebrate Pride Month with the release of four beloved queer films on special edition Blu-Ray.

First up: the defining release of the drag classic To Wong Foo, Thanks for Everything! Julie Numar. The movie that dared to cast four action stars–Patrick Swayze, John Leguizamo and Wesley Snipes–as drag queens on a cross-country road trip. In addition to deleted scenes from the archives, the film will feature a new retrospective mini-doc with actor John Leguizamo, Director Beeban Kidron and screenwriter Douglas Carter Beane.

Jeffrey, the seminal classic of 90s Queer Cinema also gets a loaded rerelease this year, featuring new in-depth interviews and commentary from star Steven Webber. Writer Paul Rudnick provided the script about a man trying to cope with dating at the height of the AIDS crisis. Can he swear off sex forever, even if he falls in love? Jeffrey also features one of Patrick Stewart’s best performances as the bitchy, aging queen Sterling. He’s enough of a reason to watch.

Finally, the much-maligned Village People musical Can’t Stop the Music gets the restoration treatment, complete with new interviews with band member Randy Jones. Writer Bruce Vlanch and filmmaker Jeffrey Schwarz (an avowed fan of the film) provide audio commentary to one of the strangest movies ever made. Set to the tunes of the Village People (yes, including “YMCA”), the film also stars Valerie Perrine, Steve Gutenberg and a pre-transition Caitlyn Jenner.

To Wong Foo and Boom! both hit May 28. Jeffrey and Can’t Stop the Music land on June 7.

Related: And The Films Played On: An Essential Guide To HIV/AIDS-Related Cinema