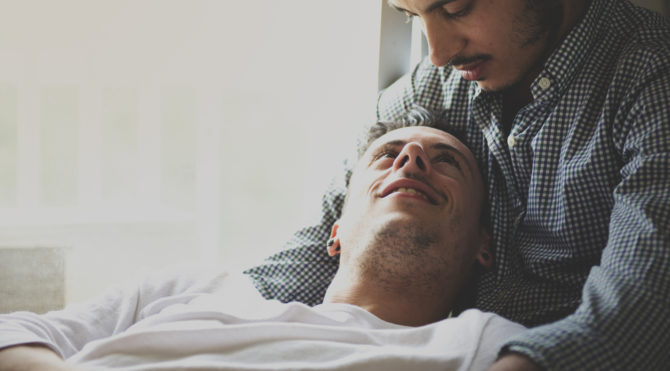 Grand gestures aren’t a thing of romance movies: Some real-life folks stage elaborate surprises to show their beloveds how much they care.

But when we rediscovered a Reddit thread of gay guys describing their significant others’ most romantic acts, we were reminded that even small gestures can make lifelong memories. Scroll down to read the responses, and get ready to swoon.

“He knows I have a serious obsession with the starry sky, photos of the Milky Way, etc. — things that we can never see where we live but I remember fondly from childhood. Three years ago, we traveled to his hometown in rural Idaho for a wedding. … The first day was overcast, so we busied ourselves with kitchen antics and day-long meet-and-greets. It didn’t clear up till the next evening. My S.O. said, ‘C’mon, let’s go for a drive.’ We set off through thick woods, then snaked up a winding hill onto a plateau, parked, and got out. It was pitch black everywhere. I almost couldn’t even see the car’s hood, let alone the shoulder. I waited for him to come around to my side. He said, ‘Now, look up!’ It was a sky chock-full of stars, plus the Milky Way, all the way across. I looked back down and he kissed me. This is only the coolest thing he’s done, of dozens. I’ll never match his originality, sparkle, or sense of occasion.”

Related: 10 of the most romantic wedding proposals we’ve ever seen

“Right when we started dating, maybe a few weeks in, he was supposed to go to a long conference in another country. I was really bummed because he would miss my birthday and because I wanted to continue getting to know him. The morning of my birthday, I was really pissed because he didn’t even call me to say goodbye before leaving. I went for a jog [on the] same path I always take. At the end of the road, he was just sitting there with coffee, smiling. It was the biggest shock of my life. I asked, ‘What are you doing here?’ And he said, ‘I quit my job. I couldn’t stay away from you for two weeks.’ (Reckless, but oh God, it made my heart flutter.) Thankfully, he found a much better job!”

“My S.O. learned to sew and made me a Pusheen the Cat woolen doll, and asked me to be his boyfriend with that. I squealed and cried. I’m an idiot.”

“On the night I met his friends, I was young and stupid. I felt like I was anti-social and didn’t have what it took to be likable, so I downed a mickey of vodka to loosen me up for the Halloween party I’d be meeting them at. … He ended up taking me back home a bit earlier because I was way too drunk. As soon as we left the party, he took me to Subway and bought bread to sober me up. We got into a cab, and I forget the ride until the end. We walked up the street to his house, and I remember vomiting beside a green bin. We got into his house, and he held me as I vomited even more into a bowl. … He took care of me all night, and in the morning, he made me labneh, a Lebanese cream cheese, and a pita. I’ll never forget that day, I know it isn’t romantic, and it’s pretty standard, but that was the first time I felt so sure of someone. Of course, he’s done romantic things afterward, but that’ll be the thing I’ll always remember.”

Related: Gay guys share the most romantic things that have ever happened to them

“My S.O. made a special arrangement for us at the resort he works at. We were both new to us being us, and he had a free stay at his resort that he had to use. We got our suite bumped up to a freaking house! This place had a private pool attached to it! We went to dinner that was filled with the best dishes I have ever had. When we got back to the suite, the people put out champagne and chocolate-covered strawberries and rose petals on our bed and in the Roman bathtub. I was waiting for someone to come out and say, ‘Gotcha!’ It was so unreal and probably the most romantic night I have ever had.”

“We were in a long-distance relationship, and my birthday was coming up. He was a true romantic, and he planned something that was pretty amazing to surprise me. He had the email address of one of my close friends, and he emailed him with the plan. My buddy invited me out for a birthday dinner on the Friday night of the weekend, down in NYC. I lived about an hour away, and when I got to the restaurant, it was my boyfriend there and not my friend. He had flown in to surprise me to me birthday. Major aww moment.”