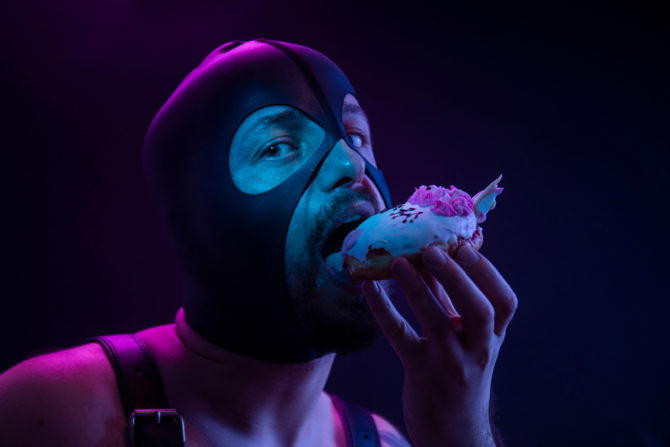 Seems like people on Reddit have a lot to unload, so to speak! More than 300 comments ensued after one user asked fellow r/askgaybro followers for their secret kink or random sexual fantasy.

Here are the responses we can print, edited for readability and only lightly censored.

“Some sort of elevator sex. On a second date, the guy I was with stopped the elevator so that we could make out. In hindsight, I wish I escalated it further, but I didn’t.”

“Having my boyfriend share me with his friends and his male family members.”

“A world where STDs aren’t a thing and I can be gangbanged and bred by a bunch of guys.”

“It would be so hot to blow a guy while he’s playing video games.”

“My friend with benefits is always super careful with me — I think he thinks he’s gonna break me — and I wish he would just take charge and f*ck my face for once.”

“Football shorts. Don’t know why, I just find it arousing when guys wear them. Especially when they go commando.”

“I got a weird fascination for socks. I’m not really sure why, but I love looking and feeling them. I’d do some weird stuff with a guy’s socked feet if he’d be okay with it.”

“My secret kink is related to gaining and feederism. I love big guys but was always scared to tell people. I’ve been more open about it, and I love how much better I feel for it. My sexual fantasy is [male pregnancy]. I f*cking love the idea of getting knocked up and bred to carry some dude’s babies. Get my tits all swollen and belly round. But alas, just a bit of fantasy play.”

“I fantasize that I am with my soulmate, and we wake up together like we do every morning and have wild passionate sex before getting up and making coffee and getting ready for our day. And then, at bedtime, we watch some Netflix together while we cuddle and then have sex and go to sleep in each other’s arms. Yeah, I know that’s not very likely to happen… but a guy can dream, right? Oh, and he’s a sexy f*cking otter with a big, bushy beard.”

“I’m beginning to think a loving, monogamous relationship where we both support each other through the good times and the bad is a kink.”

“Mine is hypnosis, specifically for fitness and masculinization. It’s not that I’m ashamed of my femme side. I just like being changed into something else.”

“It’s quite simple: I would like to have a boyfriend who likes to wear wrestling singlets all the time.”

“Not sure if this counts as a kink, but I’ve always had a thing for older guys. Gray hair is a huge turn on for me. I have a uniform fetish, too. Business and police suits are so hot to me.”

“I’m really into spanking. Not really sure why it turns me on, and I kinda feel bad for liking it. Never dated anyone really into it, just the casual slap in the butt, which is nice but doesn’t fulfill my desire.”

“To have a boyfriend who’s a submissive top. Not only that, but he would be taller and buffer than me, and I would be the small, twinky one. He’d call me Sir and be clingy and needy and tell me how much of a slut he is. ”

“I’ve always wanted to have sex outdoors in the mountains.”

“I’d love to f*ck a guy right after someone else with a smaller d*ck came inside him. And then have that guy stick around and get hard again by watching me.”

“I like it when a guy shouts out his SSN and bank account info when he reaches orgasm.”