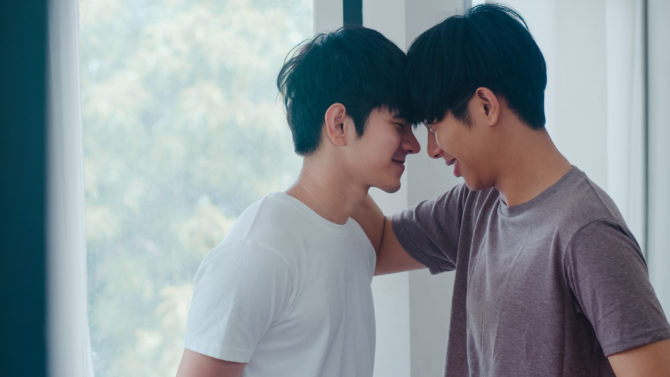 Adding certain benefits to friendships can be an awkward endeavor, but then again, many gays already have practice asking someone fancies a shag.

One guy who wants to get that ball rolling asked his Redditor brethren for tips in a recent thread. “I’ve been wanting a [friend with benefits] for a long time now but have no idea how to get one,” he wrote. “How did you guys meet? How did you initiate sex/being FWB? Any advice is appreciated.”

And here are responses from commenters on the post, many of whom said the benefits came before the friendship.

“I live in Miami. I really don’t know if it’s a cultural thing across different gay cities, but I find it easy to just be upfront about it. Doesn’t have to be awkward. I just ask. Sometimes, just through Grindr, a hookup becomes a friend, and I’ve already had sex with them so that boundary has already been crossed. It’s usually harder when you’re friends first, but I usually don’t shy away from letting a friend know I find them attractive and wouldn’t mind porking.”

“Usually just takes a guy from Grindr who’s receptive to the idea — although not many are into the idea, ‘cause pandemic. When it lets up, just go get coffee with people. If you both vibe with each other, then you go to someone’s place and f*ck, and if that works, you keep doing it. I’ve had one friend that way, and a few others through the highly LGBT group I’m in. Best advice I can give is be chill [and] try not to catch feelings, and if you do, be honest about it. Also be receptive to what the other person says. One of the best ’benefits’ of FWB is that you’ll get to know what each other likes in sex, so remembering details makes for a great time.”

“For all of my FWBs, the sex happened first. They’re all hookups who I ended up meeting with multiple times and becoming friends with.”

Related: When it comes to roommate hookups, lgbtq people seem to do it better

“Some guys I’ve hooked up with so many times over the years, they just became friends as well. However, I only hang out with one of them. The rest, even though I consider them friends, are just regular hookups.”

“Eugenio hit on me. I was breaking up with my partner of 17 years and went online to a chat room. He found me, chatted me up. I told him he was too young for me. He asked how old is old enough. I said 28. Five years later, he contacts me again when he was 28. But of course, I didn’t find out until two years later that he was the guy I sent away because he was too young. Clint I met on Recon. He has a partner of 20-some years. He’s his partner’s top, and he is my boy. It works because although I would marry this man in a hot second, I knew what the deal was when we met and I haven’t tried to change it. Eugenio and I have been FWBs for 8 years. Clint and I have been FWBs for 5 years. Just don’t catch feelings, as your generation says.”

“My friend turned ex-boyfriend still lives with me because I have a [two-bedroom] and [he] always wants to cuddle but he gets hard and needs to put his d*ck somewhere, and sometimes I let him.”

“We’re friends who do actual, in-person friend things together. Looking for it on the apps isn’t the best way if you want actual friends. We met at the gym.”