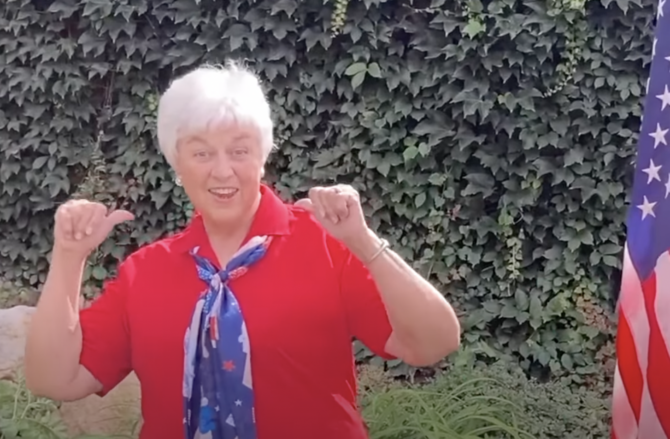 Meet Linda Paulson. She’s a Salt Lake City grandmother who just announced that she’ll be on the ballot for Utah State Senate… in a rap video.

The video was actually posted to Paulson’s YouTube channel earlier this month but didn’t get much attention until local media in Utah noticed it over the weekend.

In it, Paulson rhymes her way through her political values, which include things like loving God, opposing abortion, being “pro-religious freedom” and “pro-police”, and supporting “traditional family” among other extreme right-wing beliefs.

“And just to clarify, as a female adult, I know what a woman is,” she raps.

According to her campaign website, Paulson, who graduated with a degree in “Family Life” from anti-LGBTQ Brigham Young University in 2007, opposes student athletes competing on teams that match their gender identity and wants to ban teachers from talking about LGBTQ issues in the classroom because she considers it “pornography.”

So far, she doesn’t appear to have racked up any meaningful endorsements and, according to her campaign’s most recent Received Contributions Report filed with the state, she has accepted a total of $4,190.33 in donations. This is in addition to $5,000 she donated herself earlier this year.

Related: Gay-hating GOP nominee Tudor Dixon’s past life as a horror movie actress is back to haunt her

Utah’s general election will take place on November 8. Paulson is running against incumbent State Senator Karen Mayne, whose campaign has received nearly $50,000 in donations. Mayne was first elected in 2009 and has been Senate minority leader since 2019.

Sold my Diplo tickets. Going to the Linda Paulson rap show instead.

My husband works in the media and always says most people shouldn’t do their own commercials. This is why.

Was she in the #MittRomney Binders full of women?

Allow me to introduce you to Linda Paulson, candidate for Utah Senate.

…yes, this is a real campaign ad. 😳 pic.twitter.com/wcJ9cnG9y3

And she uses that last line to be transphobic. Bless her heart.