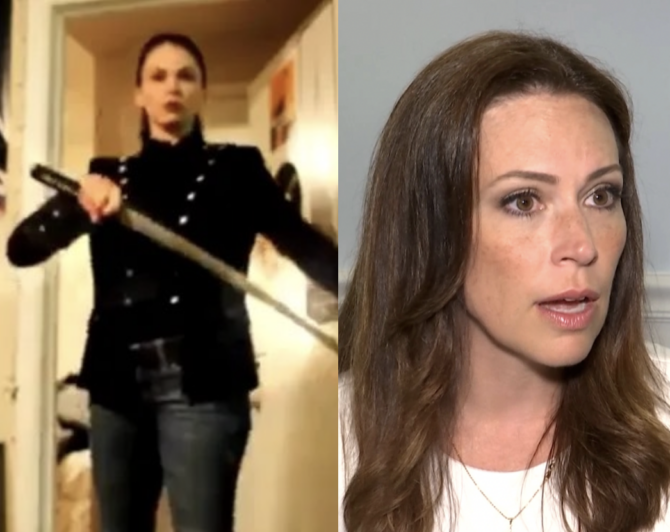 Conservative nutjob Tudor Dixon is terrified of drag queens, but, if you ask us, her past life as a horror movie actress is much, much scarier.

According to her website, the 45-year-old mother of four, who nabbed the GOP nomination for governor in Michigan earlier this month, wants to ban schools from talking about anything LGBTQ-related, police what bathrooms trans kids use, and “protect young girls from being forced to compete against biological boys” in sports. She also thinks Donald Trump is God, drag queens are Satan, abortion is murder, and the 2020 election was rigged.

Related: This gay-hating GOP nominee once worked for Rosie O’Donnell and starred in a zombie golden shower film

Prior to her recent foray into politics, Dixon was an aspiring horror movie actress. According to IMDB, her film credits include the 2008 thriller “LexiBaby” and a some weird vampire web series called “Transitions.” She also appeared in the raunchy 2012 sex comedy/horror flick “Buddy BeBop vs the Living Dead”, which depicts women being attacked, sexual assaulted, and peed on by male zombies.

So did we forget about Tudor Dixon’s acting career in horror films pic.twitter.com/bcOzgB2aHA

So far, Dixon has avoided having to confront her horror movie past by simply not talking about it or trying to distract people by making inflammatory and often transphobic comments anytime it’s brought up.

Shortly after clinching her party’s nomination, for example, she launched a gender-based attack against her opponent, incumbent Gov. Gretchen Whitmer, tweeting: “It’s time to elect a real woman in Michigan.”

Thank you President Trump! It’s time to elect a real woman in Michigan.

(For the record: Whitmer is a real woman.)

Dixon followed that up with another tweet asking, “What is a woman?” and then tagging Whitmer.

Dixon is said to be considering former NBA star Willie Burton as her running mate. The 54-year-old was first drafted by the Miami Heat in 1990 and went on to play for a number of NBA teams before retiring in 1999.

Neither Dixon nor Burton have ever held public office before.

Failed actress Tudor Dixon now wants to be governor. Don’t give her the part. pic.twitter.com/WTkVq8PT6c

She’s a D rate vampire actress. She needs a script. She can’t be trusted by her own team to spin their hateful positions properly.

“Whatcha been up to today, Laura?”

Oh, nothing. Just thinking way too much about the zombie movie that Tudor Dixon was in.https://t.co/SjxNt4fDUf

Schlock movies, schlock candidate. Can’t wait to see the GQP response, “She didn’t get caught cheating to get on the ballot”.

I could watch that scene wherein TUDOR DIXON gets eaten by zombies 1000 times and not get bored!! #Oscars pic.twitter.com/44dU1JUnQm

From vampire actress to vampire politician.

“With my acting background in zombie movies, I am well prepared to lead this State”