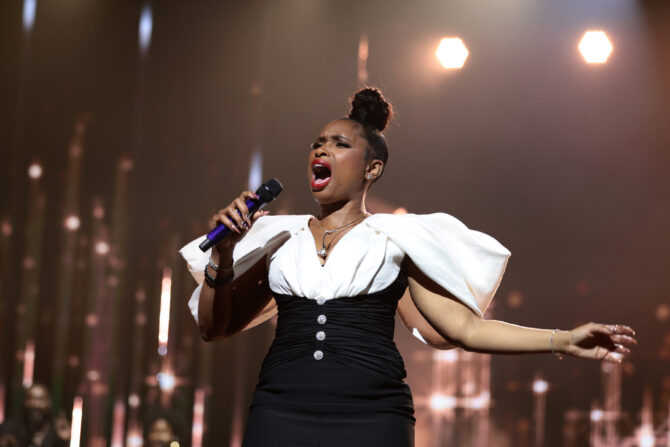 Please stand by for a special public service announcement: By the end of the weekend, Jennifer Hudson could achieve EGOT status.

Whether you’re a theater gay, one of those queers who keeps better track of awards nominees than their exes, or both, we would like you to know that pundits are predicting the former American Idol contestant could earn a Tony Award during this weekend’s 75th annual ceremony, thus completing the legendary awards “quadfecta” made up of an Emmy, a Grammy, an Oscar, and a Tony.

And while we don’t doubt Hudson could easily win a performance Tony one day, she’s actually highly favored to earn gold this year for producing. That’s because the Dreamgirl is one of many big names behind the critically adored A Strange Loop, the Pulitzer Prize-winning musical from Michael R. Jackson.

Related: Unapologetically big, Black and beautiful, ‘A Strange Loop’ has changed the face of Broadway

If she does, indeed, earn the Tony this weekend, Hudson would officially enter the esteemed echelon of EGOTs, a prestigious group of artists with the distinct honor of earning all four major awards. It’s an exclusive club that includes the likes of Audrey Hepburn, Rita Moreno, and Whoopi Goldberg—just to name a few.

In anticipation of this major career milestone, let’s look back on how Jennifer Hudson earned her previous three awards, her “EGO,” if you will…

Hudson may have only placed seventh in the third season of American Idol, but she proved, definitively, that she’s “not going” anywhere with her breathtaking screen debut in director Bill Condon’s Dreamgirls. Capably stepping into the role of Effie White—originated by Jennifer Holliday—Hudson had our hearts from the moment she first sang “And I’m Telling You I’m Not Going.” Some will quibble that the nature of the role should garner her Best Actress consideration, but the gambit paid off, and the film newcomer more than deserved her Academy Award for Best Supporting Actress Oscar, beating out the likes of Cate Blanchett and Little Miss Sunshine‘s Abigail Breslin.

Still feeling the glow of the Oscars, Hudson soon stepped into the spotlight once again with her self-titled debut studio album. Led by the Billboard-charting uptempo single “Spotlight,” the album would achieve “Gold” certification and eventually earn the singer a Best R&B Album Grammy over stiff competition from Boyz II Men and Al Green. Less than a decade later, she was back on the Grammy stage to claim Best Musical Theater Album for the Broadway revival of A Color Purple alongside Cynthia Erivo and Danielle Brooks. Technically, this make Hudson an “EGGO.”

Ok, so this one flew under the radar a bit, but, just last year, Hudson scored a Television Academy Award for executive producing Baba Yaga, an immersive VR experience about the titular ogress, an Eastern European legend. While we admit this seems exceedingly random, the star was part of the short’s celebrity voice cast—also including Kate Winslet and Glenn Close—so she decided to come on board in a producing role. A great move, we might add, because it nabbed her the Daytime Emmy for Outstanding Interactive Media for a Daytime Program. And before you ask: Yes, of course it counts!

Will Jennifer Hudson be our next EGOT? Tune in to the Tonys to find out—airing Sunday, June 12 at 8pm ET / 5pm PT on CBS, and streaming simultaneously on Paramount+.