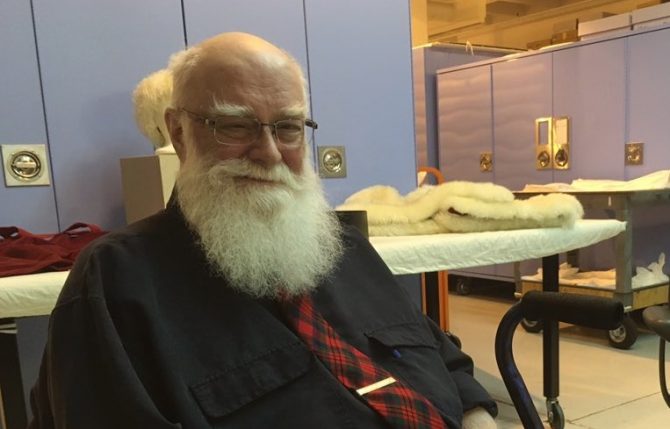 After 30-plus years of playing Father Christmas, Leo Treadway is hanging up the Santa suit. Suits plural, actually. And in recognition of his service, Treadway’s outfits will now be featured in the Minnesota Historical Society.

Treadway, a mental health counselor and an AIDS and gay rights activist, started playing the role of Santa in 1987 when his reddish-blond beard started turning white. He originally wore the same red suit his father wore in the role, but when that suit wore out, he worked with professional designers to craft custom embroidered costumes based on the Santa-adjacent characters St. Nicholas to Joulupukki, according to a recent profile in the Pioneer Press.

“In our collection, Santa mostly appears on greeting cards, ornaments, holiday-themed marketing and in historic photographs,” Sondra Reierson, 3D objects curator at the Minneapolis Historical Society, said in a statement. “Santa Leo’s suit is the very first in the collection. It’s especially notable because it was designed and made locally and comes with such a compelling personal Minnesota story.”

During the recession, Leo Treadway stopped asking kids what they wanted for Xmas, seeing as they probably weren’t going to get it. Instead he asked what good deeds they had done that year to help others. Answers took the kind of time you don’t get in malls, so he avoided malls. pic.twitter.com/TvMMgcXPkQ

That compelling story includes several other notable roles: Treadway was the national co-chair for Lutherans Concerned, the founder of the LGBTQ-friendly Wingspan Ministry at St. Paul-Reformation Lutheran Church in St. Paul, and a founding member of the national Lesbian and Gay Interfaith Alliance. He served on three gubernatorial task forces dedicated to gay rights, as well as an HIV task force for the commissioner of the Minnesota Department of Health. He was instrumental in bringing the AIDS Memorial Quilt to the former Hubert H. Humphrey Metrodome in Minneapolis in the early 1980s. On top of all of that, he’s also a Vietnam War vet.

Related: People are fainting over this children’s book featuring a gay black Santa written by a Jewish man

And, of course, Treadway is a member of the North Star Santas, a network of real-bearded St. Nick portrayers from across Minnesota. Now here’s a Santa we can believe in!