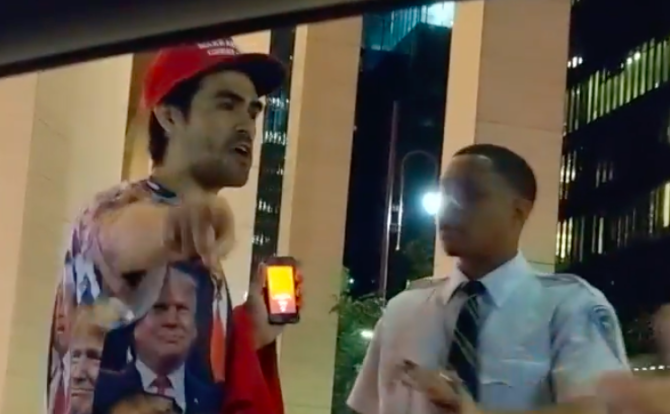 Carl Pacheco says he was just hoping to have a good time when he showed up to Kathy Griffin‘s recent show in Houston in a bright red “Make American Great Again” hat, a t-shirt with pictures of Trump’s face on it, and carrying a knife.

Richard Nunez and his wife, Michele, also attended the show. Afterwards, they got into a heated altercation with Pacheco in the parking lot, OutSmart reports.

“We were one of the last few to exit the hall,” Richard Nunez explains, “and made a comment to ourselves like ‘Whaaat is he wearing?’ and ‘Is that for real?’ and he responded with a comment similar to ‘Do you want a political debate?'”

In a video that was uploaded (and since deleted) from YouTube, Michele Nunez can be heard saying, “Hey, asshole, f*ck Trump!” To which Pacheco responds, “F*ck you, f*cking c*nt!”

That’s when Pacheco charged the vehicle, kicked the passenger door, and pulled out a switch blade, which he used to jab at the window.

“Luckily the rising window shielded my wife from the stab!” Nunez says.

Police were called, but by the time they arrived at the scene Pacheco had already left.

According to his attorney, Michael Mercer, he “went to that concert expecting to be able to have political conversations with people” and that Nunezes “had too much to drink and got offended” by what he was wearing.

“You should have the right to go express yourself at a concert, as long as you do so peacefully and politely,” Mercer added. “Hopefully the police will give us an opportunity to tell our side of the story.”

Pacheco, who identifies as a “gay Latino immigrant”, tells OutSmart that he finds it interesting how the media has portrayed the “white middle-aged people” as the victims, meanwhile he’s being “demonized” and portrayed as “a neo-Nazi.”

He also says he doesn’t feel he did anything wrong.

“I am cooperating with the police investigation. I don’t feel I’ve done anything wrong based on the laws and the circumstances of what happened.”

Meanwhile, police reviewed the footage and have drawn their own conclusions.

Victor Senties, a spokesman for the Houston Police Department, confirmed expletives were exchanged between Nunez and Pacheco, and that Pacheco did, indeed, kick the passenger-side door and brandish a knife, but police do not believe he tried to stab anyone with it.

“He didn’t try to stab [Nunez],” Senties clarified. “He was poking at the window.”

An investigation is ongoing. So far, no charges have been filed.