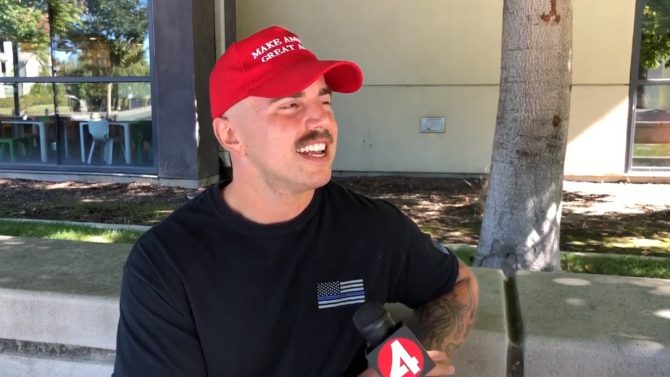 Gay Trump supporter and San Francisco resident Max Guglielmelli has opened up about his conversion to the cult of MAGA. Needless to say, his reasoning makes no sense.

Guglielmelli wore his MAGA hat for an interview with San Francisco station KRON and discussed his reasons for backing Trump, and what it’s like to support the most anti-queer administration in history.

“I get a lot of dirty looks,” he says. “When I’m getting coffee or whatever, people behind the counter make no eye contact. They don’t want to see my face. … I’ve had people ask me, ‘Do you feel safe?’ Isn’t that telling which side is violent? Because I’m just going out there to walk.”

Guglielmelli served in the Army during the war in Afganistan, where he was stationed in Kuwait. He claims he identified as gay at the time, but supported the military’s discriminatory “Don’t Ask, Don’t Tell” policy. He claims when he returned from his tour of duty, he experimented with gender-bending.

“When I was in the military I felt like I was the only liberal, so I couldn’t wait to come back to California. I did some gender-bending, wearing makeup and skirts. In the Army, we all had to look the same. I really wanted to express myself. Be more unique,” he said.

He then explains that he began to support Trump during his first run for office after seeing hypocrisy on the left. “They are the ones that are the most vicious,” Guglielmelli says. “I looked inside and I was like, ‘Oh, when I was supposed to be tolerant, I was the most intolerant,’” he said. “I started to question everything. The more educated I became, the more conservative I became in 2017.”

Related: This gay guy explaining his support for Trump is enough to make your brain melt

Guglielmelli apparently didn’t remember that Trump ran for office in 2016 not 2017. He then gives his primary reason for supporting Trump: “Taxes, hello! Tax, tax, tax. The Democrats want to tax everything. They want to take our rights away, infringe on our freedoms.”

When confronted with the Trump administration’s anti-LGBTQ record, Guglielmelli seems oblivious. “This President likes you,” he claims. “He’s not going to take rights away from you. He wants you to be a free American. He’s OK with gay marriage. He’s OK with gay people.”

We have to wonder where Gugielmelli did his “educating” about Trump…particularly if he’d already supported Trump’s election before he underwent his awakening. Quite simply, all Gugielmelli’s claims are demonstrably false. Trump has increased taxes on low and mid-level income Americans and adopted harshly discriminatory policies toward queer people, particularly transgender Americans. Most recently, his administration argued before the Supreme Court that LGBTQ people are exempt from civil rights protections, and businesses should have a right to fire employees for being queer. Trump has also appointed a number of judges who have said that the court should end marriage equality.