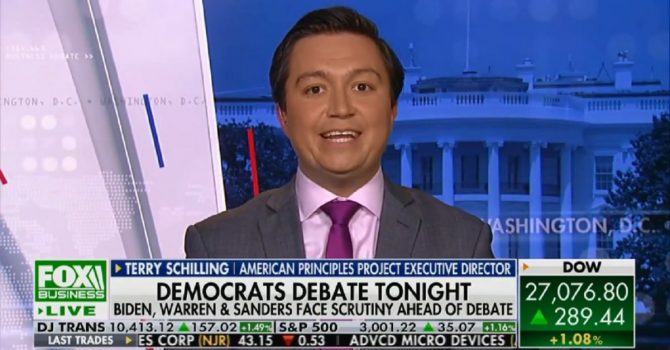 Terry Schilling recently announced he would be running in the Republican primary for Iowa’s 2nd Congressional District after his father, Bobby Schilling, dropped out after being diagnosed with cancer.

But one week into his campaign, the 33-year-old father of five has suddenly found himself at the center of homophobic Twitter scandal and, let’s just say, it’s not going so well for him.

In a since-deleted Twitter thread from May 2019 that resurfaced late last week, Schilling wrote: “I have zero problem explaining heterosexual sex to my kids if they ask–it’s how babies are made. Am I really a snowflake for not wanting to explain butt sex to my kids? ‘Dad, can two dads have kids together? Why do they get married? How do they have kids?'”

In a follow up tweet, he added: “‘Yes, two dads can get married and can have kids, but they have to hire a woman to implant an embryo in her uterus and carry the baby to term, then the two dads take the baby away from the mom, just like a puppy.'”

The thread continued: “Is this the conversation I should have with my kids? Parents, you’re not snowflakes for not wanting to explain the sordid world of gay couples — who really don’t get married anyway.”

In another resurfaced tweet from February 2020, Schilling pondered: “Why do trans people pick the dumbest names after they transition?”

That tweet disappeared from his Twitter page on Monday. But hours later a screenshot of it reemerged:

Good morning to everyone except any of you who have ever unironically said “Trans people pick the dumbest names after they transition” https://t.co/sasbIWKde7 pic.twitter.com/cjsGRBNHp5

Schilling responded to the screenshot by writing: “I’m going to develop a trans name generator. Will send to you once the site is up. Will be a ton of fun.”

Speaking to the Globe Gazette yesterday, Schilling, who currently heads up the anti-LGBTQ hate group American Principles Project, said he stands behind every single one of the homophobic and transphobic tweets that he deleted.

“I don’t regret anything. It’s all truth and it’s how most Americans feel,” he said, adding that he only deleted the tweets because “I don’t want to be taken out of context in the future.”

Schilling then went on to claim he has lots and lots of gay friends and that he hangs out with them all the time.

Then he said most of his gay friends support his homophobic beliefs, particularly his stance on homosexuality not being discussed in the classroom.

“Most of my gay friends don’t think kids should be learning about this stuff in school, either,” Schilling alleged. “which is why I feel even more confident this is not going to backfire or be a negative for the campaign.”

“It’s true! I love ‘The Gays!'” Schilling wrote. “Nicest and funniest friends I have are gay. And they like me too!”

It’s true! I love “The Gays!” Nicest and funniest friends I have are gay. And they like me too! https://t.co/tOm64QzGyf

Related: “Family values” candidate busted for having Ashley Madison account: “It was a moment of weakness”