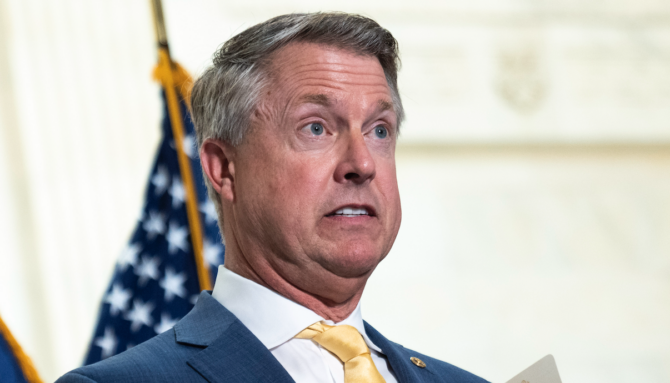 In the latest installment of the Right’s culture war, Sen. Roger Marshall is demanding changes to television ratings to warn parents about LGBTQ representation in shows.

The current guidelines note if a program includes sexual situations, as well as violence and coarse language. Marshall’s proposed change would put the very existence of queer people on par with these categories.

The Kansas senator was the lead author on a letter to the TV Parental Guidelines Advisory Board. “To the detriment of children, gender dysphoria has become sensationalized in the popular media and television with radical activists and entertainment companies,” the letter reads. “This radical and sexual sensation not only harms children, but also destabilizes and damages parental rights.”

“When we were young, you could watch cartoons without having to worry,” DeSantis said while stumping for Nevada Senate candidate Adam Laxalt.

“When we were young, you could watch cartoons without having to worry.”

Cruz offered an even more ridiculous take, telling an audience during a live podcast taping, “In every episode now, they’re gonna have Mickey and Pluto going at it … You can always shift to Cinemax if you want that.”

“In every episode now, they’re gonna have Mickey and Pluto going at it … You can always shift to Cinemax if you want that.” pic.twitter.com/iZX82OiyC2

Marshall’s office pointed to four examples of the types of shows he’d like to see flagged — Danger Force and The Loud House on Nickelodeon, and She-Ra and the Princesses of Power and the upcoming Dead End: Paranormal Park on Netflix. He’s also apparently very concerned by a recent Pixar casting notice seeking talent for a transgender character.

The letter was co-signed by fellow GOP Senators Steve Daines of Montana, Mike Braun of Indiana, Mike Lee of Utah and Kevin Cramer of North Dakota, and asks the board for an in-person meeting to discuss changing its guidelines.

He added: “We certainly don’t need Washington, D.C., senators joining in to use these kids as political punching bags.”