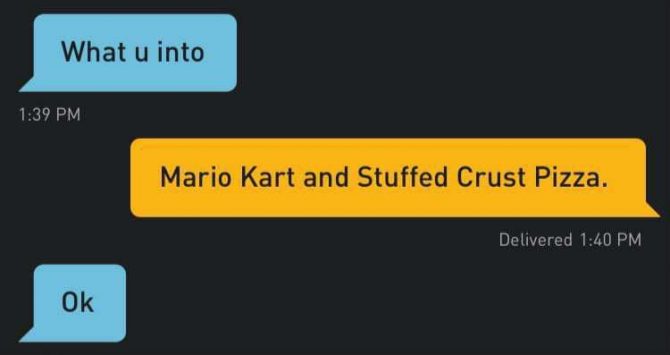 Men’s Humor is a social media account you’re possibly not following. It posts funny gifs and memes aimed squarely at straight dudes. It has over 6million followers on its Instagram and Twitter accounts.

Yesterday it posted an online exchange from a dating app, suggesting a man had found his perfect partner.

The first person texts: “What u into?”

Men’s Humor caption the screenshot with “Marry her.”

The only thing is that many users recognized the screenshot as coming from Grindr: a “dating” app aimed at gay, bi, trans, and queer communities. The majority of users are gay and bi men.

The tweet has since gone viral, with many users amused.

I am begging you to hire one queer staff member

Grindr itself waded into the discussion with its own winning tweet.

Rather than suggesting Men’s Humor had made a mistake, it took the opportunity to thank the account for reminding people that trans women also use Grindr.

“Thank you for recognizing that trans women use our app 🌈💛”

thank you for recognizing that trans women use our app 🌈💛 https://t.co/RuOS3MD1x2

Grindr’s tweet has had over 15k likes and almost 2k retweets in the 12 hours since posting. Some commentators have debated online transphobia and whether trans women feel welcome on the app. Many have applauded Grindr for its message.