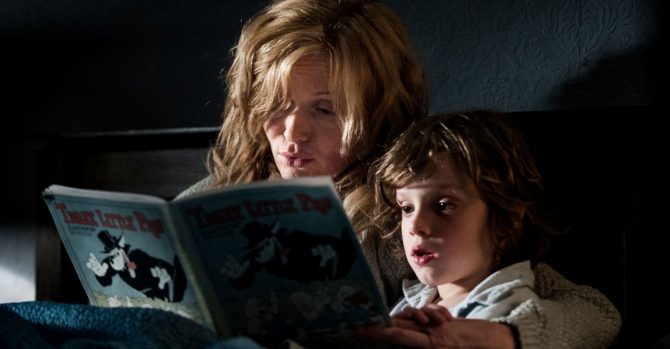 The Ironic: The Babadook

The world shall forever remember 2017 as the year of The Babadook. Though the eponymous film first debuted in 2014, the Australian monster hit became one of the top viral stories of 2017 when screenshots of the eponymous film listed as gay interest on Netflix began turning up around the web. In an even stranger twist, the queer community began to embrace the character as an LGBTQ icon. Gay Babadook memes surged on social media, and the character even started turning up at pride celebrations.

This Halloween, we look back at where it all started. The Babadook tells the story of Amelia (Essie Davis), a single mom raising her son Sam (Noah Wiseman). Sam begins to display erratic, even violent behavior, and blames an ever-growing list of delinquencies on The Babadook, a monster from a pop-up storybook. Amelia first dismisses the idea, but as more and more strange occurrences begin to plague their household, she starts to wonder: what if the Babadook is real?

Writer/director Jennifer Kent shoots her film with expressionistic visions of ever-growing shadows and darkness to convey the growing psychological stress on Amelia. Various critics have observed that Kent uses The Babadook as the embodiment of grief, clinical depression and parental frustration. In our view, all three are correct: Sam and Amelia are both grieving over the loss of Oskar, their husband/father, which continues to take an emotional toll on them both. Similarly, as a single parent, Amelia finds herself overwhelmed by the demands of her young son. That stress becomes a monster unto itself.

While the gay icon status of The Babadook might have started as a tongue-in-cheek phenomenon, various critics have commented more seriously on how the behavior of the character mirrors that of a dramatic queer relative, or how having an LGBTQ person in the family upsets traditional, heteronormative dynamics. He also has a style all his own, which we love. Jennifer Kent has endorsed the idea of the Babadook as a coded queer character: much like that annoying queer person in the corner of the bar, he can never have enough attention.

This Halloween, that’s good enough for us. Watch the film as an ironic coming-out story, or as an atmospheric creeper playing with themes of depression and mental illness. Either way, we have a feeling we’ll be seeing The Babadook at Halloween parties–and pride celebrations–for years to come.