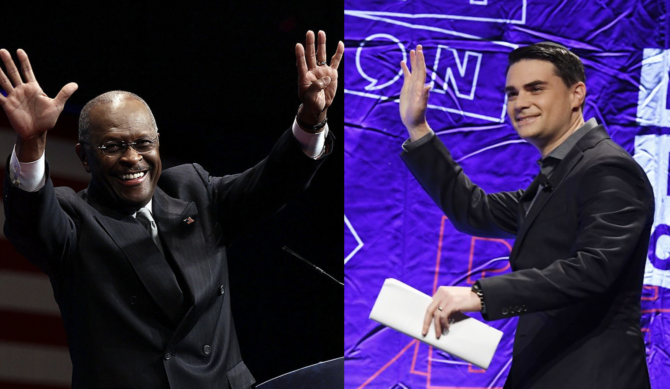 Herman Cain is back from the dead… again… sorta.

The 2012 GOP presidential primary candidate, who died from COVID-19 in July 2020 after attending a maskless Trump rally in Tulsa, Oklahoma, has been trending all morning after Newsmax ran a story about Black conservatives.

Related: Herman Cain tweets from beyond the grave (again) and this time he’s questioning his own death

A screenshot showing Cain, alongside Sheriff David Clarke and Ben Carson, with a chyron that reads “Left considers Black conservatives to be traitors” has been circulating on Twitter. Also featured in the lineup is extreme right-wing YouTuber Ben Shapiro, who isn’t Black.

This is an actual screenshot from Newsmax. I did not edit this. pic.twitter.com/zTevhmwMAH

Why Newsmax selected Cain for its lineup of Black conservatives is a mystery, especially when there are plenty of far more relevant, not to mention living, people it could have chosen–Herschel Walker, Candace Owens, or Tim Scott, just to name a few.

Related: So Ben Shapiro attacks LGBTQ people…because he wants to sleep with his sister?!

An even bigger mystery is why Shapiro, who believes homosexuality and transgenderism is the result of people being unable to “control their impulses”, was included on the list.

Here’s what folx on Twitter have to say about it…

I guess Diamond and Silk were busy so they had to get Ben Shapiro and Zombie Herman Cain to make a lineup of black conservatives. https://t.co/w2ppqr11Ce

Well, Herman Cain is mum on this subject and Ben Shapiro appears to be even deeper in the closet than anyone had imagined.

Ah yes, Ben Shapiro, the leading voice of black conservatives. The ghost of Herman Cain is a close second.

Apparently Herman Cain is the new Republican Jesus and he rose from the dead a couple days ago. https://t.co/e8Dhvp6ccT

remembering when herman cain caught covid at a trump rally, died, and then his account kept tweeting pro trump shit after he died. love those memories

Conservative media is running so low on black Republicans that Newsmax borrowed Ben Shapiro and a dead Herman Cain for this screen shot. Are they so embarrassed by Tim Scott they couldn’t use him? Too sexist to use Candace Owens? ? https://t.co/6nuo6cNRxN

In fairness, I don’t consider Herman Cain to be anything these days but dead.

Ben Shapiro is only there to conjure Herman Cain at a Newsmax seance? pic.twitter.com/58xyHQgBkE