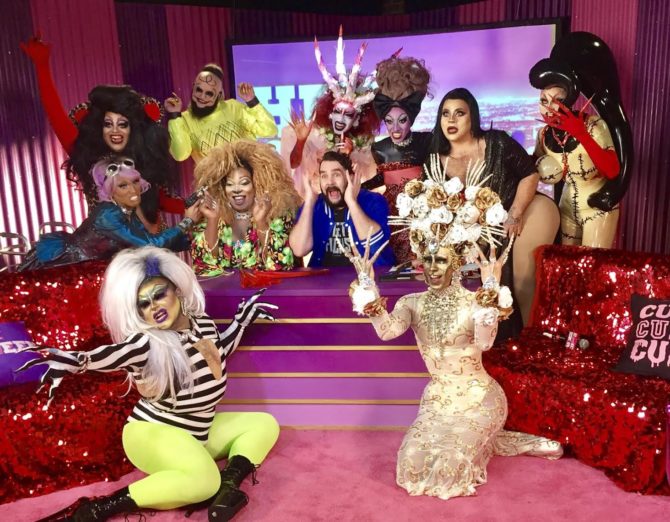 It’s been a moment since the Boulet Brothers crowned their first Drag Supermonster, but the folks at Hey Qween have dug up the bones and put together a reunion show of monstrous proportions.

All nine contestants of the ?hit YouTube series? “Dragula: Search for the World’s First Drag Supermonster” have returned and are ready to weigh in on all the drama from the debut season.

“Drag is blowing up, which is amazing, but there is a certain section of people that aren’t getting the spotlight they deserve,” explained the Boulet Brothers to reunion host Jonny McGovern.

Long before it found its way onto the web, Dragula was a well-known, traveling nightlife event catering to the spooky and transgressive side of drag. From Los Angeles to New York City, the Boulet Brothers took their outrageous party all over the country.

“And as we know the alternative drag community is full of creativity and there are so many stars out there… we have to bring them out,” they added.

The beauty of Dragula, the web-series, is its ability to showcase a wide variety of alternative performers to an audience from all parts of the world.

Showcasing the lighter side of Dragula, contestants Meatball and Melissa Befierce were often critiqued by others on the show for not being “monster” enough.

“I won the Dragula competition twice before the show,” explained Meatball. “I’m not ooky-spooky and I may not have the same talents as some of these girls, but my personality, my talent and my ability to perform is better then some of the others. So you can all suck my tuck!”

Like any other reality competition show, tensions ran high and the claws came out throughout the series.

Related: Katya and Trixie Mattel get real about life after ‘Drag Race’

When asked why she thought the audience and cast found her to be so polarizing, one of the show’s standout contestants Loris explained, “I went into the competition with some strong skills and some things that I could really work on… This whole experience has made me a stronger performer, a stronger person and it helped me grow a thicker skin and in this industry you need that.”

Meatball, whose reunion look included a walker, broke her hip early this year while attempting a handstand during one of her performances. But despite being disabled and surely in pain, she held her own against a number of queens who brought up the drama they had with her during the show.

“I was making fun of everybody, not just Loris,” she said. “You have to understand, we were all cooped up and having having a good time and it just happened to be that she was so extra… I had to call it out.”

Drama aside, every good reunion show is an opportunity for contestants to talk about their lives after the cameras stopped rolling. For the ladies of Dragula, the spotlight has grown immensely and their lives have clearly been changed.

“These girls, you can just see how much they’ve elevated in their confidence and in their performance. We’re so proud of what everyone has done,” said the Boulet Brothers.

From newfound fame and expanded fan bases to greater work opportunities, these monsters have truly taken a step out of the darkness and into the spotlight.

Watch part one of the Dragula Reunion below and for more fabulous videos head to the Hey Qween YouTube Channel: