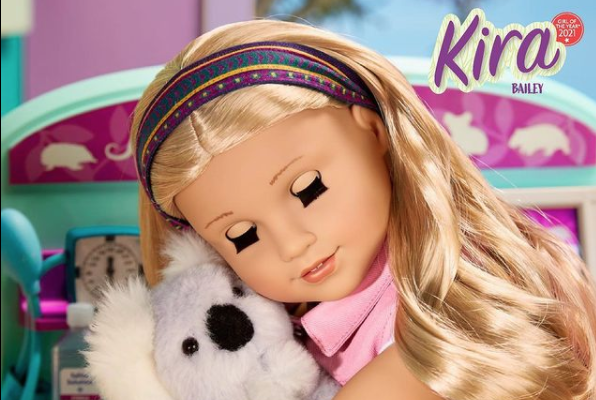 American Girl, the still-popular doll brand that grew a devoted fanbase in the ’90s, has released its first doll with an LGBTQ storyline. Cue the outrage.

The brand, a subsidiary of Mattel since 1998, pairs each doll with a book of the character’s backstory. 2021 ‘Girl of the Year’ Kira Bailey’s story has sparked outrage among homophobic collectors as she has two lesbian aunts.

10-year-old Kira, its explained in Kira Down Under, takes a trip to Australia to spend a few months at her aunts’ wildlife sanctuary. At one point in the story, it’s mentioned that her aunts got married “after the law was changed to allow it.”

You can just imagine how some homophobic parents and collectors took this.

“American Girl collectors continue to be ~the worst people in the world~,” reads the video’s caption.

And as PinkNews reports, a scan of the Amazon reviews for the product back up Nachman’s story.

“Homosexuality is an inappropriate topic for a children’s book and I am very disappointed that it was woven so blatantly into the storyline for Kira,” reads one.

“The storyline is inappropriate and far too mature for young readers,” another reviewer wrote.

Julie Parks, an American Girl spokesperson, tells Yahoo Life: “From the beginning, our ‘Girl of the Year’ characters have been designed to reflect girls’s lives today and the realities of the times. As a brand, we’ve always strived to share the message that there’s no ‘magic recipe’ for a family and that families can be made up of all kinds of ingredients — and each is unique and lovely. We know for girls who can directly relate to Kira’s circumstances (i.e. a father who has passed away or a couple in a same-sex marriage), we’re glad to show them that the make-up of one’s family doesn’t matter — it’s still a family and that’s all the counts. It’s a sentiment we love at American Girl.”

Back in 2015, the company faced similar backlash after it included a story about a girl with two gay dads in its magazine.