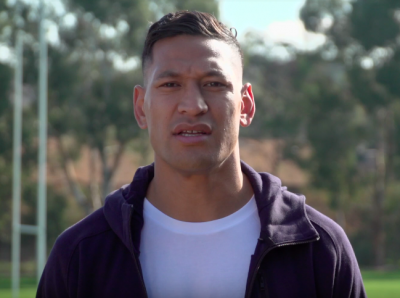 Former professional rugby player Israel Folau is in a bit of a bind and he’s hoping fans will help bail him out… to the tune of $3 million.

In April, the now ex-New South Wales Waratahs player took to Instagram to lecture his 330K+ followers about the evils of homosexuality, warning them that “hell awaits … homosexuals,” and urging gay people to “repent” as “only Jesus saves lives.”

“Those that are living in sin will end up in Hell unless you repent,” he spouted. “Jesus Christ loves you and is giving you time to turn away from your sin and come to him.”

In response, Rugby Australia and New South Wales Rugby (the organizing bodies that employed Folau and oversee his team, the New South Wales Waratahs) announced they were terminating Folau’s four-year $5 million contract, saying the post was “inconsistent with the values of the sport” and that Folau breached his contract by sharing material on social media that “condemns, vilifies or discriminates against people on the basis of their sexuality.”

Naturally, Folau sued. But it turns out, suing is expensive. So now he’s launched a $3 million fundraiser to try and cover his mounting legal costs.

According to Folau, he’s already spent $100,000 of his own money, and he’s sick of it, so he wants other people to “fund the rest of my action in court.”

“I believe the termination of my contract is unlawful, which is why I have started legal proceedings against Rugby Australia and Rugby New South Wales,” he laments on his GoFundMe page.

Folau is suing his former employers for $10 million for loss of earnings as well as “associated exposure and opportunities.”

“The termination has cost Mr. Folau the best years of his rugby career, participation at the Rugby World Cup and the chance to become the greatest Wallaby try-scorer (a decades-old record he was likely to break),” his lawsuit reads.

On his GoFundMe page, Folau says he doesn’t think he did anything wrong when he told gay people they were “living in sin” and would “end up in hell.”

“I uploaded some messages from the Bible on my Instagram page,” he writes. “I believe that sharing the Bible is an act of love and compassion.”