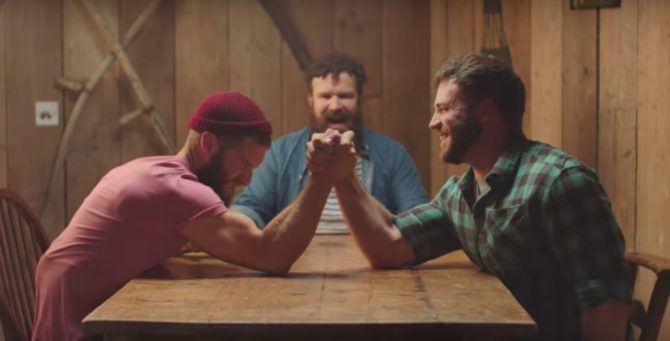 The Rowse Honey ad riffs on the Goldilocks fairy tale, starring a madcap menage of men named Matt, Joey, and Phil and following their exploits as they prep some breakfast porridge as part of a cooking show.

Jules Chalkley, the creative director of ad agency BMB, says, “We wanted to find the ultimate advocates for porridge and honey.”

So they set their sights on “the original porridge connoisseurs,” The Three Bears.

Talking to Ad Week, Chalkley says they wanted “to start from a position of absolute respect.”

“It was important to find the characters that would make it feel authentic and genuine, who we could trust to accurately represent the gay bear community. We cast and wrote very carefully, taking advice from people within the community, and encouraged the cast to co-write the scripts and be their genuine selves. Ultimately this is a funny and charming breakfast show for everyone and made with love and fun.”

“The filming process reminded me a bit of my experience of the bear community,” says actor Matthew Lister, who appears in the ad as one of the bears. “We arrived on the first day not knowing each other, but everyone was easygoing and welcoming. Very quickly the banter and camaraderie between us all developed, and by the end we all felt like great mates.”

Sadly, Chalkey says some of the funniest moments wound up edited out.

“The three guys clicked immediately and had this instant chemistry. Even when the camera wasn’t rolling we were all in hysterics. Unfortunately, most of it we couldn’t use, but we’ll leave that to your imagination.”