Caught your response to our statement during yesterday’s briefing. I’m sure you’ll likely face more questions about this today, so there were a few things I was hoping to correct before you do. If you don’t mind, I’ve BCC’d many of the WH press corps that have been asking these questions.

1. You might want to have a few good lawyers look at your legal claims. Five circuit courts have determined that our nation’s civil rights law prohibiting sex discrimination protect transgender people. The EEOC agrees as have numerous district courts. The legal trend is clear, robust, and well reasoned.

2. Whether or not transgender people were discussed when Title IX was enacted in 1972, you really need to stop pretending like the transgender movement just got started. I refer you to this wikipedia page. You’ll notice there’s a long section on the 70s…and decades before! Another fun fact, Minneapolis passed an ordinance protecting transgender people way back in 1975. Literally almost every major city in America has followed suit.

2a. Also, when Title VII of the Civil Rights Act became law in 1964, sexual harassment wasn’t part of the conversation. That didn’t stop the Supreme Court from ruling that Title VII prohibits sexual harassment. Because, duh. Does this White House also think that’s wrong?

3. Rather than answering whether or not this was a civil rights issue, you continued to say that this was better left to the states. You’ll recall that this is the same argument cynically used by opponents of civil rights to allow state sanctioned discrimination to continue for decades. Your boss loves tweets, so check out the list I sent out the first time you trotted out this argument: 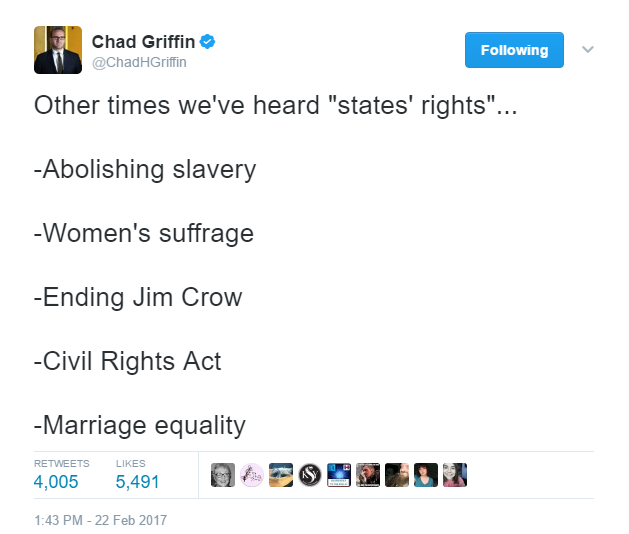 The fact of the matter is that there are hundreds of thousands of trans kids across the country right now who are deeply, incredibly afraid of going to school because their government is no longer unequivocally standing with them. It doesn’t matter if they live in New York City or Idaho, kids deserve protection. Don’t you agree?

4. You said the President cares about the troubles transgender kids face in schools. Did he see this report that shows nearly 50 percent of transgender people attempt suicide at least once in their lifetime? Did he know that since the election, 70 percent of LGBTQ teens reported feelings of hopelessness and worthlessness? In that same survey, 36 percent had been personally bullied or harassed, and 56 percent had changed their self-expression or future plans because of the election.

And if he cares so much, will he commit to meeting with the families that this devastating decision will affect? You may have seen that they’ve requested a meeting with your boss Donald Trump, Jeff Sessions, and Betsy Devos — after more than 1,000 of them pleaded with the administration not to do this last week. We would love nothing more for him to explain to a transgender teen or their parents why they shouldn’t be worried about why they shouldn’t be alarmed by this devastating decision.

We would greatly appreciate your prompt response.

As of Queerty’s press time, Spicer had not responded to HRC