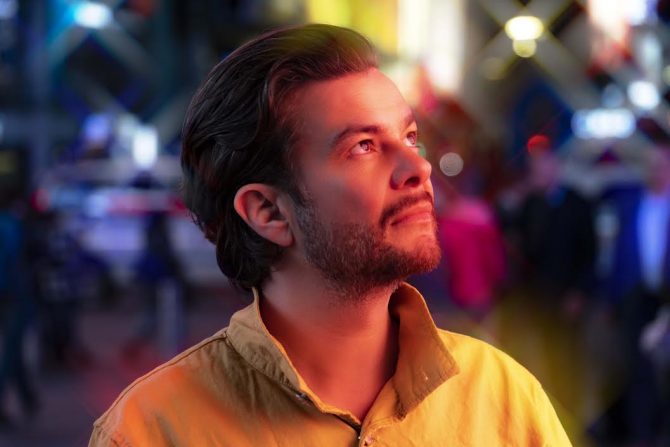 When Edward Russell first launched Inside the Groove during lockdown in 2020, he didn’t expect it to become one of the most popular Madonna podcasts on the planet within a matter of months. Now, 50 episodes and over 400,000 downloads later, he can barely keep up with the demand, cranking out a new episode nearly every week, plus recording bonus episodes, and launching his very first line of merchandise this week.

Each episode focuses on a different Madonna track or era, offering a deep dive into the creative process and its cultural impact. With references to the music videos, media appearances, and live performances, the episodes often include snippets from the song’s multitrack session, as well as interviews with co-producers, composers, backup singers, critics, and fans.

Queerty had a chance to interview Russell on the eve of Madonna’s birthday (she turns 63 tomorrow!) and to talk about the podcast. (We also had a chance to chat with him on the most recent episode of Inside the Groove, available now!) Here’s what he had to say…

QUEERTY: I want to start off with a difficult, hard-hitting question… If you could only listen to one Madonna album for the rest of your life, which album would it be and why? (Greatest hits albums don’t count!)

RUSSELL: Tough one, but I’m going with Like a Prayer. Such a great collection of songs from an artistic peak. I guess it also reminds me of being 19 years old–young, stupid and beautiful–things that I no longer am!

You launched Inside the Groove last year and it’s quickly become one of the leading podcasts dedicated to dissecting Madonna’s music. You’ve recorded about 50 episodes now, had over 400,000 downloads, been featured in The New York Times, and you just launched your first line of swag. When/where did you first come up with the idea for the podcast and did you ever expect it to become such a huge hit so quickly?

Lockdown had just begun, and “Vogue” had turned 30. I was reading lots of articles about it, but they all missed part of the story. It’s one thing to write about music, but another to talk about it and play examples–podcasts are brilliant for doing just that. I was surprised at how quickly it took off, but I feel there’s never been enough focus on her creativity as a writer and producer. I’ve had so many messages from people who’ve told me that it’s helped reconnect with Madonna’s music and it’s been a real comfort from them over a difficult 18 months.

You’ve spoken to a lot of people who’ve worked with Madonna in the past, including her longtime backup singer Donna De Lory and her co-writers Tony Shimkin and Peter Rafelson, among others. Have you heard from Madonna or anyone inside her camp today?

I’m told that she’s aware of the podcast but I’ve no idea if she’s listened. I can’t imagine she’d be particularly interested. Who knows? Maybe she’ll turn up at my front door one day with a list of notes and corrections?

What would you do if that happened?

Well, she’s not coming in unless she takes her shoes off! Seriously, I would love the opportunity to ask her about the lesser-known tracks. But I’d love to speak to her about her role as a producer. All her collaborators praise her work in this area but not a single journalist ever asks it. I think this adds to the myth that she’s a producer in name only, which I feel is a little misogynistic.

One of the things I appreciate most about the podcast is that you’re not just fanning out for 30 minutes every episode. Instead, you offer insightful commentary on her music and vocal performances that feels almost academic at times. And you’re not afraid to be critical either. I know this has gotten you into trouble before with her stans. I’ve gotten into trouble with them before as well. How do you deal with it?

She’s an underappreciated creative genius, but part of being a fan is seeing the shade as well as the light. Some people don’t have this depth or perspective. Or maybe they’re just jealous at other people’s success and feel it takes away from what they have to say? I think some of them don’t get my sense of humor. Most of those stans are good people, but there’s a small contingent who aren’t really fans of Madonna at all. She’s just the vessel that allows them to be trolls. They must lead such boring lives.

I enjoy starting discussions but there are some who jump on everything I tweet to tell me I’m wrong. That’s fine, but:- pic.twitter.com/OYxFYEnopr

An obvious one, but I really love “only when I’m dancing can I feel this free”. When you watch Madonna dance, she looks so liberated and happy.

And since you’re not afraid to be critical, what’s the worst lyric she’s ever written?

Any of the multiple songs where she rhymes “girl” with “world”. It’s a cliché that you can get away with only once, or maybe twice…

What about “waiting” and “hesitating” and “anticipating”? I think she uses those three words even more.

Careful–you’ll invoke those trolls! She also self-references a fair bit, and that’s kind of cool. It’s like a little Easter egg for the hardcore fans to spot these things.

What is Madonna’s most underappreciated album?

It’s never been a favorite, but I’m starting to appreciate Hard Candy a bit more. The production was always a little off, but with the distance of time, it’s possible to focus on how great some of those melodies are.

And since you’re not afraid to be critical, what Madonna’s most overrated album?

A tough one, because I really like Erotica, and it has some of her best songs, but in terms of musicality, it’s a bit of a step back from Like a Prayer. Shep Pettibone was fantastic on production, but he didn’t help push Madonna’s creativity in the way that Patrick Leonard had, or other producers such as William Orbit and Mirwais would go on to do.

That’s a really interesting point and one I hadn’t considered before, but you’re right! It’s almost like she was so focused on pushing the envelope thematically that the actual music took a bit of a backseat.

She was certainly creative in a visual way during that era. But the songs are slightly under-developed. The chord changes go where they should and never where they could. Take “In This Life,” a beautiful, tender ballad. But had Pat Leonard collaborated on that one, I think it could have been up there with “Live To Tell” or “Oh Father.”

A lot has been said about Madonna’s later career and how the music she produces today just isn’t up to par with her earlier material. What’s your take on this? Do you think her best days are behind her? Or does she still have at least one more great album left in her?

I think that the work she’s doing today is just as good as her peers. But, of course, some of her previous songs were easily eleven out of ten. So, she’s not being compared to others, she’s being compared to herself and that’s an unrealistic benchmark. If she gives us another “Vogue”, I’ll be happy. But I’ll be surprised. Who else has two songs as good as “Vogue” in their repertoire?

Last question: What’s a piece of Madonna trivia you can share with us from all the time you’ve spent dissecting her music?

I remember listening to her isolated vocal on “Express Yourself” and at one point I could hear the spill coming from her headphones. I could make out a much more electronic demo of the song and her collaborator Stephen Bray singing a rough melody. It was like traveling in time being able to get inside the moment.

OK, I know I said that was going to be the last question, but… I have this geeky fantasy of Madonna one day releasing her demos and alternate mixes of songs and unreleased tracks. I doubt it’ll ever happen, but can you imagine? Going back to your earlier point—that she used to be an 11 out of 10—I bet she’s got some good stuff in the vaults.

From the late ‘90s onwards, a lot of the demos and unreleased songs have leaked. But there’s a heap of stuff from her early years that we’ve never heard. She recorded six tracks with Shep as a follow up to Erotica that are complete mysteries. There’s even a song called “Desperately Seeking Susan”–written for the film–that’s never made it out of the vaults. Maybe one day?

One can only hope! So, what’s next for the podcast?

I just launched a range of merchandise. I’ve teamed up with an incredibly talented designer to create t-shirts inspired by Madonna’s own visuals. But the focus is always on the music and I’m keen to do episodes which work through each album, track by track. There’s still lots of stories to tell.

The conversation continues. Listen to Edward and Graham chat about Madonna’s 1987 soundtrack album “Who’s That Girl” on a special birthday edition of Inside the Groove out now.