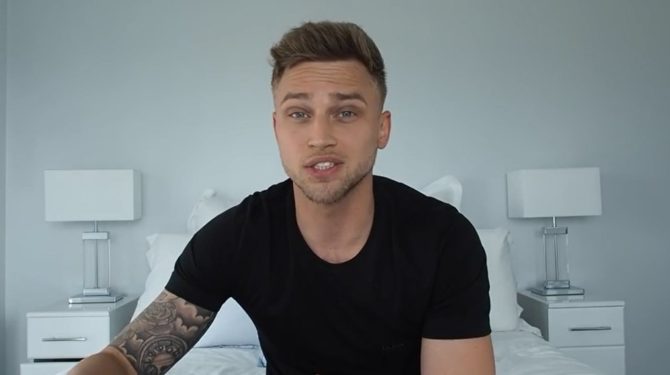 “I’d been debating about recording the video for quite some time,” he told his 250,000 followers. “And I’ve seen that a lot of people had done videos like this before and I didn’t want to just jump on the bandwagon.”

He continued, “It’s not necessarily something I hide, I am who I am and I’m so proud and happy of who I am and who I’ve become.” However, he adds, “I don’t feel I need to be running around the streets screaming it from the rooftops.”

If you haven’t guessed where this is going yet, Cunard is gay.

Seeing results from working your A** off in the gym is one of the best feelings ever! ______ #motivation #dedication #gymmotivation

In the video, titled “Coming Out The Real Me,” the 26-year-old Brit describes the first time he realized he was gay, his first relationship with a man (with a guy who was 18 years older than him), and how he came out to his family.

He did so after breaking up with his older partner.

“I was in really bad place when it happened and felt that life wasn’t worth living,” Carl recalls.

One evening, he texted his parents saying he wanted to end his life. They had no idea he was gay at the time.

Cunard replied by telling them, “I am gay.”

“My parents didn’t know how to react and what to say initially and even cracked jokes to make me feel at ease. Even now, my dad still doesn’t love to discuss it, but that’s OK.”

Cunard says he hopes that by sharing his story, he can be “an inspiration for people” and help “encourage them to be who they want to be as well.”

Watch the video below.