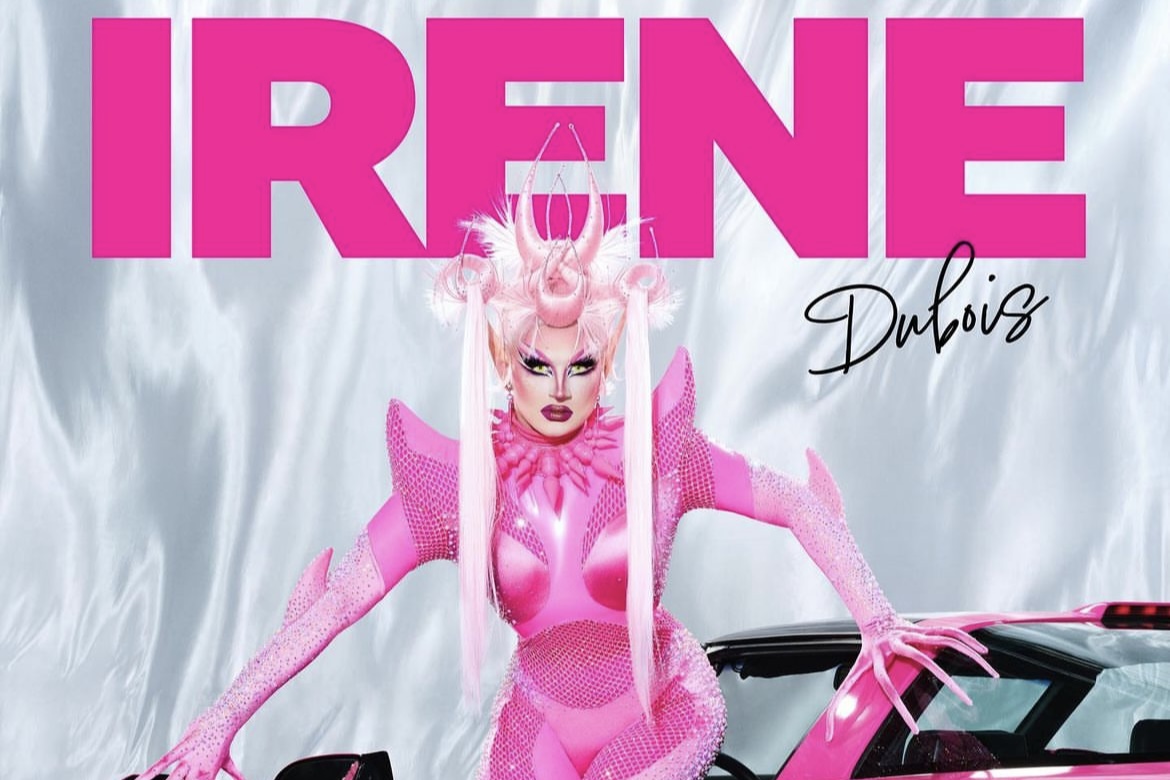 The premiere of Rupaul’s Drag Race‘s fifteenth season is one of the highest rated in its history, and credit goes to its super-stacked cast.

Among legends like Sasha Colby walking in the room and queens chopping wood with their bare hands on the runway is Irene Dubois, an artful Seattle queen who dared to host an ice water-making tutorial during a talent show. Camp doesn’t begin to cover it.

While the comedy didn’t quite land with the judges, fans still got a two hour-long introduction to Irene (with a ton of charismatic talking heads) before she made her exit.

In our inaugural Chop Shop interview of the season, we caught up with Irene for a rapid-fire Q&A sesh that revealed cast secrets, a drag show horror story, and the queen’s true secret talent.

QUEERTY: First: did you mop anything good from the werk room?

IRENE: I don’t even know if it counts as mopping. They give us like an entire filing cabinet full of drag supplies – things to style wigs with, take makeup off with, stuff like that – and I unloaded that entire cabinet into one of my boxes. I actually asked them to bring me an extra box so that I could fit it all.

Oh, they set you up good!

They set us up good, baby! Those filing cabinets that you see in each of our stations? I always thought that those were there for the girls to put all their stuff in. No, they’re full when you get there.

Q: If you were to have your own QVC product line, what would it be?

I’d have to be selling glasses of water, naturally. I’m clearly the expert on that. I’m the only person who’s ever been brave enough to reveal the secret recipe. You can catch me peddling my wares – my wares being the thing that humans are made up of.

Q: So you’re a fellow Texas girl, but you also rep Seattle on the show. How do each of your home cities help inform your drag?

Q: Do you have a fun fact you could share about one of your season 15 sisters that might surprise the fans?

Robin fierce has one of the smoothest brains any human being I’ve ever met in my entire life. She referred to this process as a world-wind.

Love Robin. One of the prettiest girls on my season; absolute orb in her skull. That’s most of my cast, honestly. It’s just the most beautiful dum-dums they could find throughout America.

I did a gig at a bar in Houston for, I sh*t you not, two people were in this bar. There were more people in the dressing room than there were in the actual bar. And after we performed our fourth number each, the host of the show came back and said, “I think we should all do one more.” And then they brought me my check for $50.

Those two people got a show, though!

Those people have gotten more of Irene than anybody else in the history of drag.

Q: What’s a hidden talent of yours that you wish you could have showcased?

Hidden talent? Well, here’s the thing: I don’t know if it came across on the show, but I’m pretty f*cking confident. So I wasn’t keeping my talents too secret.

Let’s see, hidden talents… Oh! I can juggle. I wish I’d gotten to juggle on the main stage. I think that probably would have saved me. I should have gone over to Amethyst, taken her pads out and juggled those.

Q: Who’s a previous season girl you think is underrated and why?

Underrated? I feel like you’re about to make me give a backhanded compliment. Like, “Yeah, you know who’s underrated? Jinkx Monsoon. I think she needs more love. Not enough people are talking about this girl.”

Another way, who do you think deserves more specific focus in the general fandom?

God, they all immediately exited out of my head. Everybody I think of, I’m like, “Oh, actually, no, they host an international franchise now.” You know what? I think everybody’s appropriately rated. No one’s underrated. Everybody has exactly the rating they deserve.

Q: What’s one article of clothing you would never be caught dead wearing in drag?

Culottes. Never wearing culottes ever. First of all, why are we going to put all that volume at our hips and thighs? And then show off our skinny little spaghetti noodle shins? Absolutely f*cking not. I’m not trying to look like a couple of marshmallows with toothpicks stuck in them. That’s not happening.

You know what Peggy Hill wears on King of the Hill? Yeah, we’re staying the f*ck away from that.

I’m not arguing with you there, but it’s not a fashion moment.

In Arlen, Texas, it was.

She was serving the girls in Arlen!

Q: Who’s a fictional character you had a crush on as a child?

Forever twink, exactly. No, Peter Pan had my heart just because I think I sort of envied his lifestyle. I wanted to live without rules, without parents; I wanted to go off on my own and do my own thing.

Here I am, baby. I’m wearing a wig for a living and waking up at noon to do press, so my life is pretty f*cking sweet.

What’s more Never Never Land than running away with the circus of drag?

You’re right. You know what? Sometimes dreams do come true. God does have favorites and I’m one of them.

Q: If you weren’t a drag queen, what career would you have pursued instead?

I would love to have been a Hollywood SFX artist. I would love to be working on sets, doing alien prosthetics for things like Star Wars and Star Trek.

I actually almost considered switching careers during the pandemic when I wasn’t able to do drag, just because digital drag was not the moment for me. But luckily scientists came up with a vaccine, so here we are!