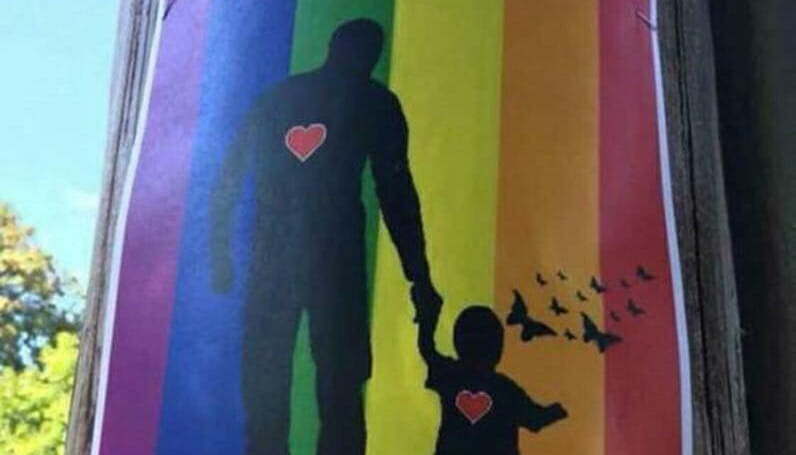 On July 27, an image of a poster reading “Pedophiles Are People Too” and “Love is Love” over a rainbow background reminiscent of the LGBTQ pride flag started making its way around social media. Actor and Pro-Trumper James Woods even tweeted it out to his 1.64 million followers.

Portland television station KATU confirmed that this sign was briefly posted near a school, Williamette Primary School in the city of West Linn, and that it was removed shortly after it was noticed by area residents.

The sign is probably the creation of alt-right trolls who are attempting to spread propaganda that the LGBTQ community is trying to embrace pedophilia under it’s umbrella.

And so it begins… pic.twitter.com/ku6FQpBbAO

“It’s just very clear that this message was meant to stigmatize and stereotype LGBTQ people,” Cameron Whitten, executive director of the Q Center in Portland, told KATU. “At a time when we are facing homophobia, transphobia, it is not helpful for these kinds of harmful messages to be disseminated out.”

This poster isn’t the first attempt to spread this fake news.

In December, 2017, 4Chan users concocted a false rumor that a “P” (for “Pedosexual”) was being added to the well known LGBTQ initialism. 4Chan users were encouraged to spread a Photoshopped flyer bearing taglines such as “love is ageless,” a more on-the-nose version of the tagline seen on the Oregon poster, “love is love.”

A similar ruse was circulated on Tumblr in June, 2018. An image supposedly showing a pride flag for MAPs (Minor Attracted Persons) was shared along with baseless rumors about pedophiles’ supposedly “rebranding” themselves in an effort to gain acceptance into the LGBTQ community.

The myth that pedophilia and homosexuality are linked has been debunked numerous times by actual science.

A 1994 study, led by Carole Jenny of the University of Colorado Health Sciences Center, surveyed 269 cases of children who were sexually molested by adults. In 82 percent of cases, the alleged offender was a heterosexual partner of a close relative of the child, the researchers reported in the journal Pediatrics. In only two out of 269 cases, the offender identified as being gay or lesbian.

“The empirical research does not show that gay or bisexual men are any more likely than heterosexual men to molest children,” wrote Gregory M. Herek, a professor of psychology at the University of California at Davis.