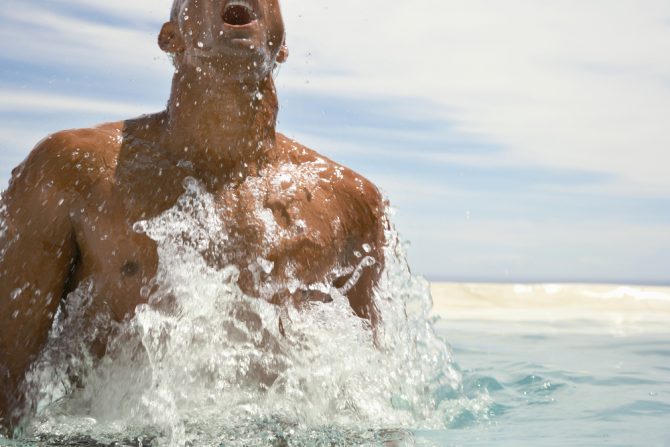 In a lengthy statement published by the Washington Examiner over the weekend, Falwell came clean about his wife Becki’s “improper relationship” with their pool boy, Giancarlo Granda.

“Becki had an inappropriate personal relationship with this person, something in which I was not involved–it was nonetheless very upsetting to learn about,” Falwell wrote.

He then accused Granda of blackmail and trying to ruin his family’s life.

Related: Jerry Falwell Jr. comes clean about rumors of an “improper relationship” with the pool boy

Now, in an interview with Reuters, Granda is pushing back against these claims.

He says that not only did Jerry know about the relationship, but he was an active participant in it, and Granda has text messages and FaceTime screenshots to prove it.

He tells Reuters that that he first met the Falwells when he was 20 years old and that their relationship involved him having sex with Becki while Jerry watched.

“Becki and I developed an intimate relationship and Jerry enjoyed watching from the corner of the room,” Granda, now 29, alleges, adding that they did this “multiple times per year” in hotel rooms in Miami and New York, as well as at the Falwells’ house in Virginia.

The material Granda showed Reuters includes screenshots from what Granda said was a FaceTime conversation he had with the Falwells in 2019. During that call, Granda said, Becki was naked as the two discussed their relationship while Jerry peeked from behind a door. Reuters was able to verify Granda’s description of the screenshots.

Granda also shared an audio recording that he says captures a conversation he had with the Falwells in 2018. In it, Becki complained about Granda describing his relationships with other people: “He’s like telling me every time he hooks up with people. Like I don’t have feelings or something.” Jerry then chimed in: “You’re going to make her jealous.” “I’m not trying to do that,” Granda replied.

Other texts obtained by Reuters show one from 2012 in which Becki wrote to Granda, “Right now I am just missing you like crazy …. Have you had this effect on all of your lady friends?”

The relationship soured after Granda told the Falwells he didn’t want to sleep with Becki anymore, which resulted in a business disagreement.

In a text sent last June, Granda expresses frustration with the Falwells, writing: “Since you’re okay with ruining my life, I am going to take the kamikaze route. It really is a shame because I wanted to reach a peaceful resolution and just move on with our lives but if conflict is what you want, then so be it.”

To which, Jerry responds: “You should by now understand that I will not be extorted. I have always treated you fairly and been restrained in response to your threats because I did not wish to ruin your life. Going forward, stop contacting me and my family.”

Granda said that while he entered into the sexual relationship with the Falwells willingly, today he feels the couple preyed upon him. “Whether it was immaturity, naïveté, instability, or a combination thereof, it was this ‘mindset’ that the Falwells likely detected in deciding that I was the ideal target for their sexual escapades,” Granda said.

Earlier this month, Falwell was placed on “an indefinite leave of absence” as the president of Liberty University after he posted a picture of himself with a woman who is not Becki, both with their pants undone, partying on a yacht.

Shortly after that, video taken at the boat party leaked online.

Two days before publishing his statement in the Washington Examiner, Liberty University’s board announced that a decision “whether or not to retain Falwell as President has not yet been made” and said it was requesting “prayer and patience” as they consulted with God on whether Falwell should be allowed back at the university.

Related: Liberty University students are breaking their silence about how creepy Jerry Falwell Jr. truly is