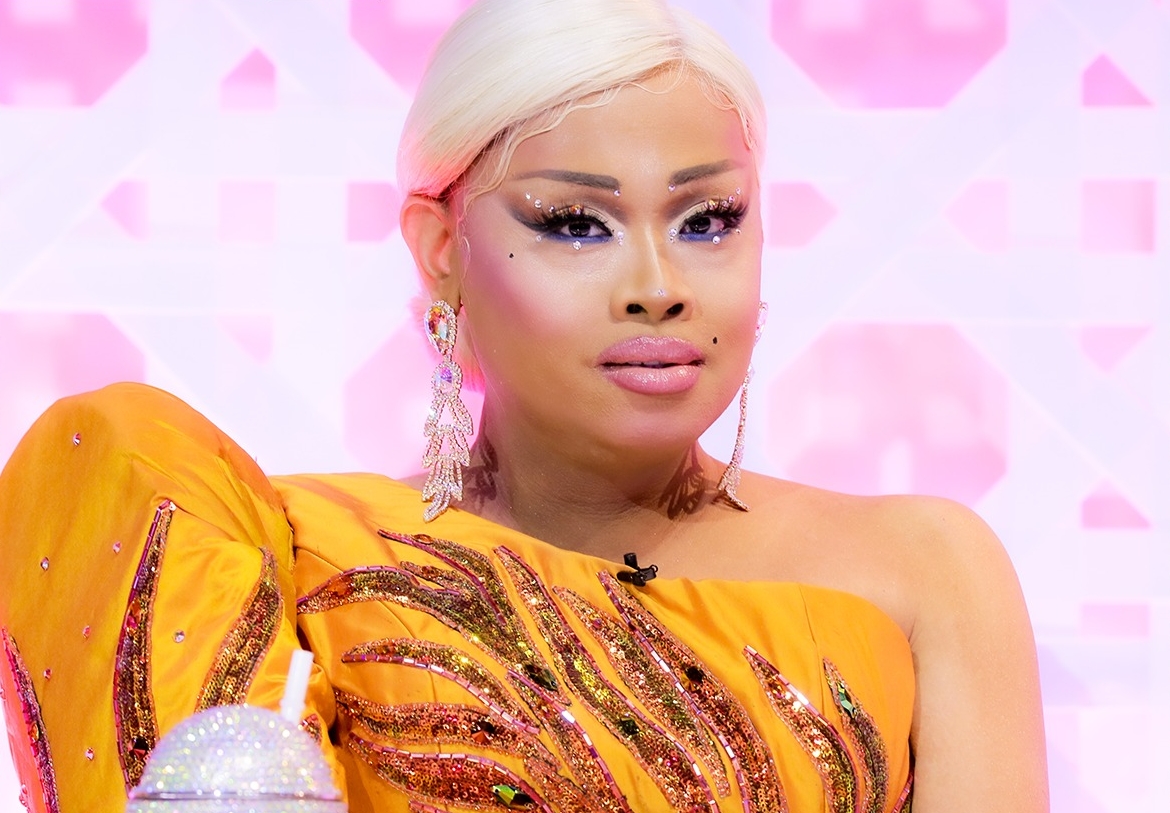 Drag Race Philippines is just days away from crowning its first season winner. In some ways, competitor-turned-judge Jiggly Caliente has already won.

Fans may fondly remember Ms. Caliente for her personality-packed showing on season four of Rupaul’s Drag Race or her short but sweet run on All Stars 6. More savvy fans may know her plethora of TV guest spots, from Ugly Betty to Broad City to Pose. Even with laundry list of appearances, Drag Race Philippines lets us see a whole new side of the queen.

In this latest installment in the Jiggly canon, we get to hear her decades of experience put into words. With deliberate, incisive, and occasionally cutting critiques, Jiggly has made it clear why she was asked to join the judging panel — whether some more sensitive viewers like it or not.

We caught up with her to chat all thing Philippines, from their explosive Untucked moments to the girls groups to end all girl groups.

QUEERTY: Drag Race Philippines is one of the best international spin-offs that we’ve gotten so far. We have so many that it’s hard to keep up with them, but there’s something about Philippines that is just taking the girls over.

JIGGLY: I’m happy that that’s what’s going on. For the last couple of months after filming, I knew that we had a great product, but you just never know with people. And my biggest concern was, with all the Asian hate going on in the world, would this be the right time for the world to accept and fall in love with these queens?

I had my doubts because of that, but I still knew that we had something magical in Drag Race Philippines. I was just hoping that the world would still fall in love with these girls.

Bring UK in here, let’s see what they got.

Come on! Bring it on. Not just the UK, all the franchises. Bring all y’all on. Well, maybe not Shea Couleé and Monét though. Maybe y’all can sit this one out.

I was just happy that “Pop Up Ate” was amazing. And then that final battle in that last 30 seconds of the song? I was like, “Oh, you can’t deny this.”

I do think the Drag Race fandom has a little bit of a special place in our hearts for the Asian queens, like Jujubee and Pangina. And you, obviously! Especially with Drag Race Thailand being so beloved but seemingly getting put on the backburner, Philippines is a welcome breath of fresh air.

Yeah, to be honest, a lot of the beloved queens from Drag Race are the Asian queens: Ongina, Manila, Jujubee, myself, Kim Chi. I think we’re the perfect mix of beauty, camp, and stupid.

And that shadiness! Our shade is unmatched. We can say the most hateful thing, smile, and then it’s forgiven.

I think it’s also because these girls are allowed to have any kind of liquor they want. [Laughs] No, but there’s some beautiful conversations that happen, too.

How did you feel when they first approached you to judge this entirely new franchise?

I thought they were pranking me. All Stars 6 hadn’t even aired yet when they asked me. They were like, “Would you be interested, in the event that we had something like this?” And I was like, “What idiot is gonna say no?”

So I told them, at any capacity, yes. I’m game. I literally said if they wanted me to be the janitor, I’d do it.

I was glad to have even been considered, because I know how the fans can get. If you didn’t have such a savory showing on Drag Race, the fandom can be very… What’s the word for it? Toxic. I was kind of worried about that.

At the same time, I personally feel – not to discredit any of my other Filipino sisters – I feel like I am more deeply rooted in my culture, seeing as I was born there and I’ve still kept up with my culture, even as I grew up here in America.

Like in Snatch Game, for instance; the girls all did Filipino characters and celebrities. At first I was like, “Oh my god, am I gonna get everything?” And when I got there, I was like, “Oh, I do know all these celebrities,” because I still watch Filipino television. There was a joke that I even knew before the contestant did.

I feel with Filipino culture, our humor is different, and it’s slightly darker, so there’s some jokes that I’m like, “Oh my god, is this gonna go?” Like in the pageant episode, one of the contestants literally said, “A dick that’s hidden behind pubes.” [Laughs] It sounds worse in translation, but the humor in Tagalog is funnier. In translation, it just sounds vulgar. And I’m like, “Man, these girls are saying this in front of a Miss Universe?”

It does seem like the tone is lost on some of the fans. Some said that you were being too hard on Turing, though it was clear that you two also had a connection. What do you say to people who think that you were singling her out?

It seemed like I was singling her out because she is the big girl of the season – she says it all the time. I personally don’t actually like saying that, because I know that she’s more than just being the big girl. The fact of the matter is, I was just a mirror for a lot of the negativity she’s going to face being the big girl of the season. I think it didn’t sit well with a lot of people because it’s true. As much as I would love to say that it’s not the reality of the world, it is.

Turing knew where I was coming from. I actually took her under my wing as my little sister when I first went to the Philippines to do my homecoming show. I fell in love with her because she was an amazing talent.

If people actually dissected the things that I’ve said to Turing, they’d know I wasn’t being mean to her. I was very direct, yes, but nothing I said was malicious. I didn’t say anything about her body, I said, “The shape of that dress doesn’t compliment your curves.” She has a beauty, and she has a curvaceous body – she doesn’t even technically need to pad because she has hips – so I wasn’t calling her out for her body. I was calling out the dress. It wasn’t complimenting to her beauty.

I also didn’t want Turing to leave, knowing that she could literally take the competition by storm.

We’ve had another judge, Pangina, come in and compete. Would you ever compete on Rupaul’s Drag Race again?

I’m not a glutton for punishment like Pangina. [Laughs] I think I’m okay at this point. I mean, you never say never, but I would hope that I’m kind of done with this.

Because I know there’s always going to be a sewing challenge! Unless it’s a season that they can promise me there’s no sewing or design challenge, then I will accept. ‘Til then, no. Absolutely not.

I’m gonna be 42 years old, I don’t have the patience to try to learn how to sew. If they can let me bring in a seamstress for that episode, sure. Can I get Raja to pitch-hit for me and make me an outfit, please? Thank you.

We’ll contact World of Wonder and see what we can do. We might be able to set something up.

Can you imagine? Y’all know I’d make it all the way to the end.