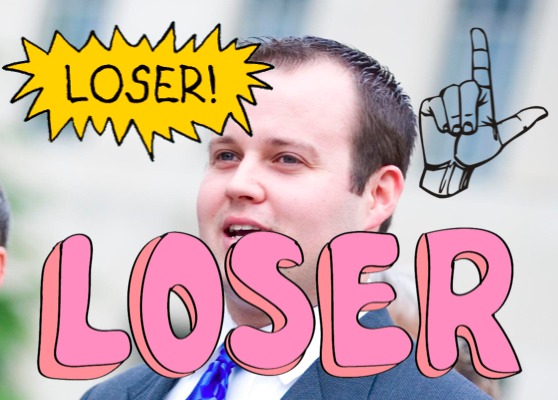 Josh Duggar has lost his lawsuit against In Touch Weekly, who he and his family were suing after the magazine outed him for being a child molester.

In 2015, In Touch reported that, in 2006, Josh had fondled several young girls, including two of his own sisters, while they slept. Not only that, but his parents, Jim Bob and Michelle, knew about it and tried to cover it up. After the story broke, Josh admitted the molestations occurred but insisted that God had forgiven him. As a result, TLC canceled the Duggars’ reality show and Josh lost his job as at the antigay Family Research Council.

Earlier this year, both Josh, who now purportedly works as a used cars salesman, and the sisters he molested filed a lawsuit against In Touch’s parent company, Bauer Publishing, for breach of privacy. In their suit, they claimed local police provided the magazine with their names, which should have been redacted being given to the magazine.

Well, last week an Arkansas district judge threw out the case, saying the First Amendment protected the magazine because the information it published was factual and that, even if the cops broke the law by providing the Duggars’ unredacted names, In Touch “cannot be held liable for the city’s and county’s failure to follow the law.”

The Duggars have also filed lawsuits against local authorities. Those cases are still ongoing. A rep for In Touch has declined to comment.