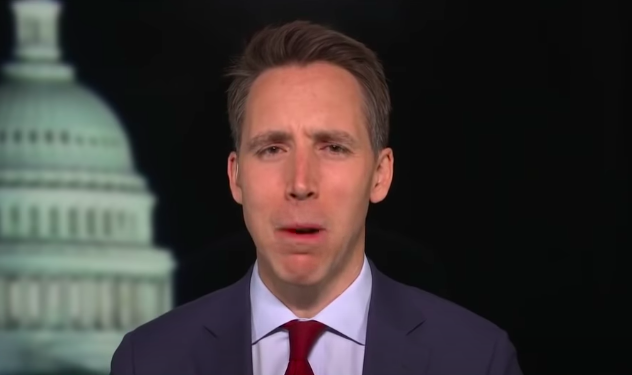 Seriously, what a drama queen. And that’s just the beginning.

Hawley went on to say that, as a result of all this, “American men” (read: straight, white, cis dudes) are “working less, getting married in fewer numbers; they’re fathering fewer children. They are suffering more anxiety and depression. They are engaging in more substance abuse.”

“Many men in this country are in crisis, and their ranks are swelling!”

Later in the speech, the antigay senator claimed that women, too, are under attack because LGBTQ people are demanding language be inclusive.

“Many of my Democrat colleagues in the Senate won’t even say the word ‘mother’ any more, for heaven’s sake,” he griped. “‘Birthing people’ is the term of choice, as if women don’t exist.”

“And leftwing advocates across the country are trying to destroy women’s sports, as if women and men are somehow interchangeable. All that too is part of the deconstructionist agenda!”

We could go on, but we think you probably get the point by now, so we’ll summarize the rest of Hawley’s speech with bullet point quotes. Here’s a sampling of a few more things he said…

But the real kicker of Hawley’s speech came towards the end, when he said… Well, maybe it’s best if we let him do the talking.

Remarked Hawley, “Can we be surprised that after years of being told they are the problem, that their manhood is the problem, more and more men are withdrawing into the enclave of idleness, and pornography, and video games?”

OK, that’s enough of that. Let’s see how people on Twitter are responding to the whole thing…

Josh Hawley has the same intelligence level of Pauly D and they both love fist pumping pic.twitter.com/o3TNjgqqf1

If Josh Hawley is an expert on masculinity then I’d like to take a few minutes to share my thoughts on quantum physics.

Josh Hawley is a little bitch.