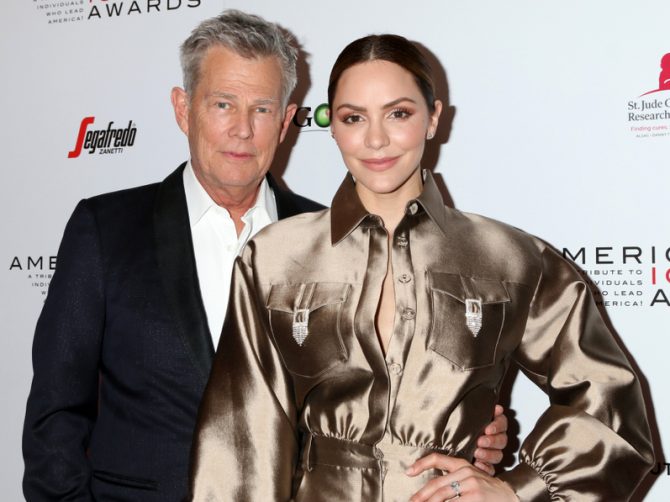 This week, Jezebel reported that American Idol alum, Smash actress, Broadway star, and supposed LGBTQ ally Katharine McPhee allegedly donated $500 in 2020 to the National Republican Senatorial Committee, a group that is working to maintain the GOP’s majority in the Senate.

After that story broke, Queerty reported that McPhee has allegedly donated waaay more than just $500 for waaay longer than just this year.

As it turns out, Federal Election Commission public records appear to show that she’s been giving thousands and thousands of dollars to Republican causes, including Donald Trump‘s reelection campaign, for well over a decade.

The more we dug into the story, the more we came to realize that, shocking as it may be to learn McPhee has allegedly been bankrolling antigay causes while pandering to queer audiences, she’s been doing it right in front our faces this entire time. We just weren’t paying close enough attention.

Throughout her career, McPhee has professed her love for the LGBTQ community, who she has acknowledged have played a pivotal role in her success as a singer and musical theater actress.

In 2018, she went so far as to publish a “love letter” to her queer fans in Billboard, in which she wrote: “I’d like to express my unwavering support to the LGBTQ community and appreciation for how much love you’ve shown me throughout the years.”

“From my initial start on Idol, I always noticed the constant love you filled me with. It continued from my debut album to Smash, all the way through to my start on Broadway. I have always felt you right by my side, you’ve kept me going and stood by me every second, and for that I am grateful.”

But underneath her veneer of “appreciation” for the LGBTQ community was a layer of normalized homophobia that, in hindsight, we should have picked up on much sooner.

Like how she has repeatedly referred to her gay fans by condescending pet names like “the gays” and “my gay boys.”

Or that time in 2018 when she recorded a backstage video before her Broadway debut in which she implied gay men love putting on makeup and fantasizing about pretty women in sparkly costumes who sing and dance.

The rumors are true – yes, I am going to give the gays everything they want. #KatOnBroadway pic.twitter.com/j9zWSTlNvB

There was also a bizarre incident in 2017 involving McPhee’s then-boyfriend/now husband David Foster.

Foster, who is Canadian, headlined a fundraiser at Mar-a-Lago for the Dana-Farber Cancer Institute. The event was attended by Donald Trump. Prior to performing, Foster joked from the stage, “Mr. President, I hope this doesn’t fracture Canadian-U.S. relations. I apologize in advance.”

Foster later claimed he didn’t know Trump would be in attendance, which seems like a stretch considering it was held at Trump’s estate while Trump was staying there. Then Foster said that he declined to perform at Trump’s inauguration… because he didn’t want to upset his friends who had supported Hillary Clinton.

McPhee was never reported to have attended the fundraiser at Mar-a-Lago; however, if a person can be known by the company they keep, and McPhee’s husband is known for being friendly with Trump, one can only wonder if she has a connection, as well.

And, according to the Federal Election Commission, she does!

Public records show that a self-employed actor in Los Angeles by the name of “Kat McPhee” and “Katharine McPhee” (presumably the same person) has donated $400 directly to Donald Trump’s reelection campaign this year, plus an additional $900 to the fundraising platform WinRed earmarked for Trump’s reelection campaign, and another $500 to the National Republican Senatorial Committee.

And that’s just according to the Federal Election Commission’s website. Who knows what other antigay organizations and super PACs she’s been supporting in private?

All of this information, of course, has been publicly accessible for years. It’s just that nobody bothered looking for it before because they all assumed McPhee was the person she presents herself as on social media.

A person who celebrates Juneteenth (which her alleged candidate, Donald Trump, tried undermining by announcing a MAGA rally in Tulsa, Oklahoma, the site of the largest race massacre in American history, that same day)…

Happy #JuneteenthDay. A true reason for us to make this a holiday- that commemorates the official end of slavery. So much they aren’t teaching us in our schools.

A person who honors trans people (who her alleged candidate, Donald Trump, banned from the military and called a “distraction”)…

Trans women and men are beautiful. Don’t let anybody tell you your existence isn’t valid. Happy Pride month to you and anybody else who identifies as LGBTQ. I love you all! ???

A person who mourned the murder of George Floyd (which her alleged candidate, Donald Trump, used to stoke racism and incite race wars)…

I’ve been at a loss of words for days trying to figure out the right thing to say. I still DON’T. What happened to George Floyd and has happened to countless other black men is absolutely despicable. My heart is so heavy.

And a person who wants to make sure everyone exercises their right to vote (while her alleged candidate, Donald Trump, and other Republicans are doing everything they can to suppress the vote)…

Perhaps this should have been our first clue. Perhaps she was signaling to her “gay boys,” er, fans all along that the person they love doesn’t really love them back, that her “unwavering support” isn’t really unwavering, and that she’ll happily accept their money, then turn around and give it away to very people who hate them.

McPhee has not issued any comment on her alleged political donations or the controversy they have caused.