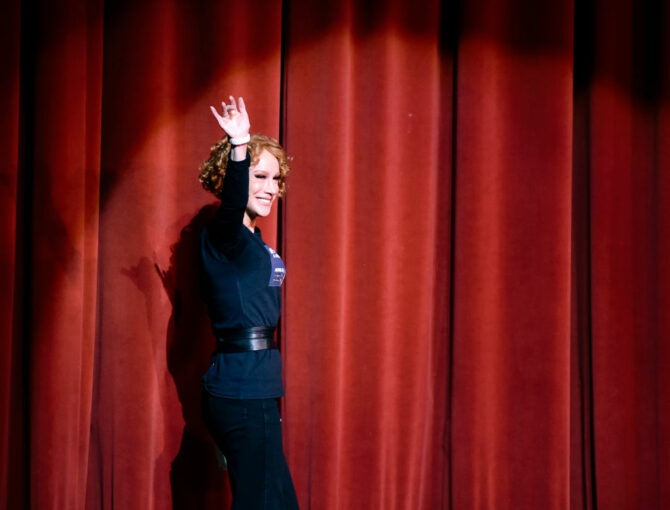 They say forgiveness is for the forgiver, but apparently Kathy Griffin either doesn’t see it that way, or she simply isn’t ready to free herself from past hurts.

The 61-year-old funny lady was just profiled by The New York Times and she’s once again taking digs at Andy Cohen and talking about being canceled.

In case you need a refresher: Cohen replaced Griffin on CNN’s New Year’s Eve show after she was fired by the network in 2017 for taking a picture of herself holding the severed head of Donald Trump.

Speaking to the Times about that now-infamous photo, Griffin says, “I wasn’t just canceled. I was erased.”

This was absolutely one of the funniest things Kathy Griffin has done pic.twitter.com/BkWKPAKuhE

As you may recall, during the show, Cohen went viral for trashing outgoing New York Mayor Bill De Blasio, saying he did the “crappiest job” before adding a “sayonara, sucka.”

CNN acknowledged Cohen went a little too far with the remarks, but ultimately said it would have him back next year. Griffin feels the network’s response was unfair and suggests Cohen should have been fired.

“Apples to apples,” she says, noting that he made a political statement just like she did.

(Side note: Griffin makes some fair points in the interview, but we’d argue that there’s a difference between saying a politician did a crappy job and posing for a photo with their severed head.)

Griffin is also still upset over remarks Cohen made several years ago when he was asked by TMZ if he had spoken to her about taking over her CNN job and he replied, “Who?”

“This is a guy that I think kind of wanted to be me,” she tells the Times. “And now he’s halfway there.”

One of the more touching moments in the interview came when Griffin talked about how she wishes she could get back on stage and entertain large audiences like she did in her heyday.

“I just want to get back to making people laugh,” she said. “More than anything else, that’s what has been robbed from me.”

We love Griffin, but holding onto this grudge with Cohen and “hate watching” the show she was fired from half a decade ago probably isn’t great for her mental wellbeing and certainly isn’t helping her to move on. Here’s hoping she eventually can. When she does, she’ll have an audience waiting.