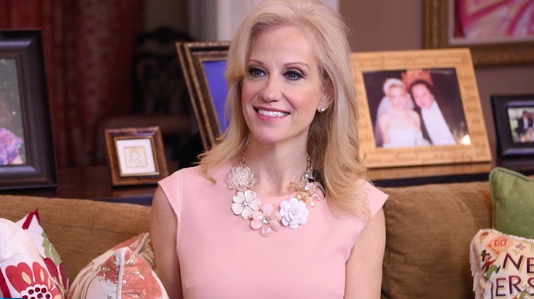 Add this one to Kellyanne Conway‘s greatest hits, right between the #alternativefacts and “Buy Ivanka’s stuff!”

While speaking to reporter Mike Kelly during an interview at her home in Alpine, Conway was asked about those bogus claims Trump made last week on Twitter when he accused President Obama of wiretapping Trump Tower during last year’s presidential election:

Terrible! Just found out that Obama had my "wires tapped" in Trump Tower just before the victory. Nothing found. This is McCarthyism!

When asked yesterday by Kelly about Trump’s insane allegations, Conway responded by saying something equally, if not more, insane: “What I can say is there are many ways to surveil each other. You can surveil someone through their phones, certainly through their television sets — any number of ways.”

Then she added, “Microwaves that turn into cameras. We know this is a fact of modern life.”

Microwaves that turn into cameras? What?

Earlier this morning, Conway was asked about those bizarre microwave claims by Chris Cuomo on New Day. Things got rather heated rather quickly.

“Chris, I’m not Inspector Gadget,” Conway quipped. “I don’t believe people are using their microwave to spy on the Trump campaign. However, I’m not in the job of having evidence. That’s what investigations are for.”

At least this much is true. Her job isn’t the share evidence. It’s to spew #alternativefacts to distract everyone’s attention from the truth.

A short while later, Conway graced the set of Good Morning America, where she told George Stephanopoulos, “The answer is I don’t have any evidence [about Trump’s wiretapping claims] and I’m very happy that the House intelligence committee are investigating.”

So, just so everyone’s on the same page, Obama may have put a camera in Trump’s microwave, though Kellyanne personally doesn’t believe he did, but she’s still glad the government is now spending countless taxpayer dollars to look into it.

Cue a new batch of memes.