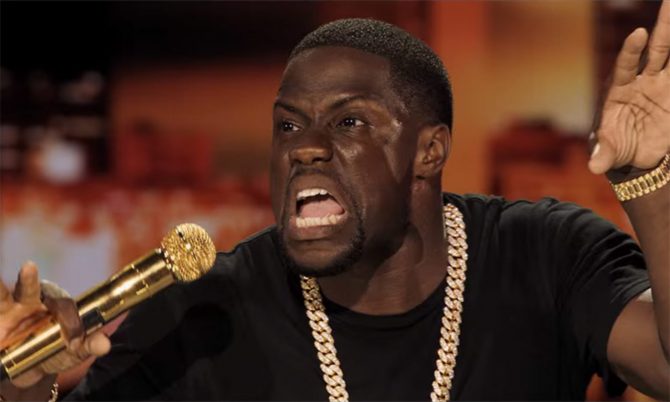 Yesterday, the 39-year-old comedian, who’s history of antigay jokes and tweets recently came back to haunt him, responded to the racist and homophobic attack against Jussie Smollett in an Instagram post, calling the incident “unbelievably sad” and decrying society going “backwards.”

This is unbelievably sad. Why are we going backwards….this is disgusting. We as people have to do better. WTF is going on the world???? Why are we falling in love with hate???? God damn it people….Choose love…I repeat…Choose love. I will forever choose love and I will continue to teach my kids how to do the same. Stand strong brother.

The remarks were also posted to Hart’s Twitter page, where they were quickly met with sharp criticism.

Do you see why the “jokes” weren’t funny now??

You should have just sat there and ate your food, Kevin. Ain’t nobody trying to watch you use this for an op.

But keep joking about beating up your kid for being gay, Kevin Hart!

Hart wasted no time hitting back. In response to the criticism, he tweeted:

I stand with a man in his time of hurt and need by giving him heart felt support and u take the time to harp on my 10yr past that I have apologized about and moved on from by being a better person. Do you want change? If so I am an example of what u want people to do…CHANGE! https://t.co/Ybbo8OYKTt

I “harp” because my community of black queer people face violence 365 in America and when we tried to tell you that we weren’t trolling you but wanted to educate how your jokes lead to actions like what happened to Jussie, you went on Ellen to talk about your wheelchair movie. https://t.co/bGXkNVQsTl

Seriously dude, if you’d made a sincere apology when this started 3 months ago, none of this would have happened.

Where is the change ????? pic.twitter.com/lqNZehfBLF

You haven’t changed. That’s why.

how nice that you can easily move on from your history of using ur massive platform to dehumanize Black LGBTQ folks!

Where is the change, sweetie? pic.twitter.com/dTiwLdqruW

Actually, you didn’t apologize. You just wanted everyone to drop it and move on with the subject.

It has become quite clear that self-reflection is not Kevin Hart’s strong suit. The man is incapable of understanding why his words and actions are problematic and he’s never going to give people the proper apology they want. At some point, folks are simply going to have to move on. In the meantime, Mr. Hart might consider taking a nice, long vacation, somewhere warm and tropical, without WiFi or access to social media.