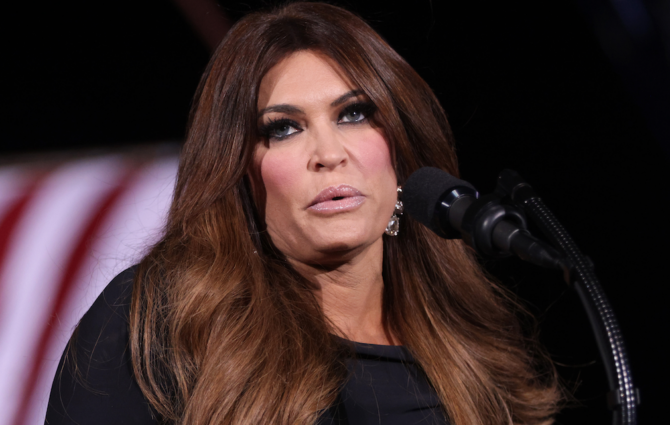 Former Fox News host and Trump campaign adviser Kimberly Guilfoyle was paid a whopping $60,000 for her two-and-a-half minute speech on the Ellipse on Jan. 6, just before the crowd attacked the U.S. Capitol, according to the House select committee investigating that day.

But more importantly than the eye-popping sum, the money came from former President Donald Trump‘s “official election defense fund” — a fund the committee alleges did not exist.

It’s not a good look for Guilfoyle, who is also engaged to Trump’s eldest son, Don Jr. The optics are so bad, even Trump supporters appear to be turning on her.

CNN’s Jake Tapper said in an interview with Rep. Zoe Lofgren following Monday’s committee hearing that “there was almost a through-line that you and the committee members thought that some of Trump’s supporters are victims of this, even some of those who got swept up on Jan. 6.”

Trump raised over $250 million from supporters by fundraising on the Big Lie that he’d won the election, some of which we now know went to paying Guilfoyle to address the soon-to-be violent crowd on Jan. 6.

“That they got grifted by this fundraising appeal that was going out several times a day to raise money for battles in courts that didn’t happen, and also you showed people deceived, talking about why they were there on Jan. 6,” Tapper said.

“Guilfoyle was paid for the introduction she gave at the speech on Jan. 6. She received compensation for that,” she added.

“People in Trump world are sharing that clip, they are aghast that this is the amount of money she got for a speech to introduce her boyfriend,” she said. “They couldn’t really get over — I had one former adviser say to me, essentially, these were folks raising money in small amounts from retirees telling them this was going to some legal fight that didn’t really happen, and instead Kimberly Guilfoyle is getting paid.”