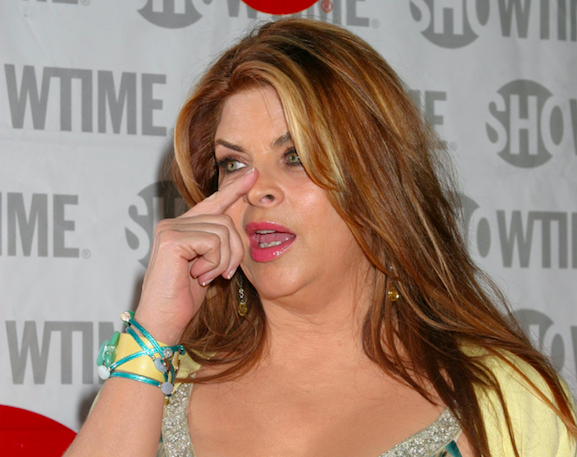 Tulsi Gabbard may be pissed that she wasn’t asked to participate in the 2020 Democratic National Convention, but one former Hollywood actress would still like to offer her an opportunity to speak, even though the convention ended yesterday.

After Gabbard griped on Twitter about not being invited to the Democratic Party’s 2020 tentpole event, Kirstie Alley invited the Hawaii congresswoman over to her house to present whatever speech she would have given at the convention in her living room.

“You can come to my house .. we will listen to your speech. We honor freedom of speech over here,” the Star Trek II: The Wrath of Khan actress tweeted.

You can come to my house .. we will listen to your speech. We honor freedom of speech over here?? https://t.co/EzUhboCDp9

We can’t think of anything we’d rather do less than hang out at Kirstie Alley’s house and listen to Tulsi Gabbard talk about the state of the Democratic Party from her Trump-adjacent soapbox.

Prior to all this, we hadn’t spent much, er, any time looking at Alley’s Twitter page. But a closer examination reveals just why washed up ’90s sit-com stars shouldn’t weigh in on politics, or why non-medical experts, in general, shouldn’t give their opinions on how to best handle public health emergencies.

Alley, it turns out, identifies as an “accidental conservative.” Apparently she used to be a Democrat, but sometime over the past decade, she abandoned the party.

Don’t follow me because you think im some kind of hard core conservative.
I’m an accidental conservative forced to jump ship because over the last decade my team has taken such a hard left that they’ve ended up somewhere between socialism & candyland with the bent of McCarthy

She also loves bashing Barack Obama, Joe Biden, Kamala Harris, Nancy Pelosi, and Democrats, in general, who she says are all a bunch of intolerant socialists.

Oh, and for a while she was busy plugging hydroxychloroquine as a cure for COVID-19 and blasting Dr. Anthony Fauci.

I’m not shoving Hydroxychloroquine down anyone’s throat.. I’m giving my opinion on it. We are direct marketed HARD CORE drugs 24/7 on TV. That gives each of us the right to decide if suicide is an ok side effect from a quit smoking drug or a anti depressant .. or ANY OTHER DRUG

In April 2016, Alley endorsed Donald Trump for president. Six months later, she un-endorsed him and said, “I hate this election and I’m officially no longer endorsing either candidate.” But by then the damage to her career was already done.

Alley stopped receiving roles and has only worked three times in the last four years–appearing as herself on Celebrity Big Brother in 2018, on one episode of the ABC sit-com The Goldbergs in 2019, and in a small role in the upcoming made-for-TV movie You Can’t Take My Daughter in 2020.

Last September, she briefly made tabloid headlines when she spoke out against Hollywood blacklisting Trump supporters.

No word yet on whether Gabbard plans on giving her DNC speech at Alley’s house.