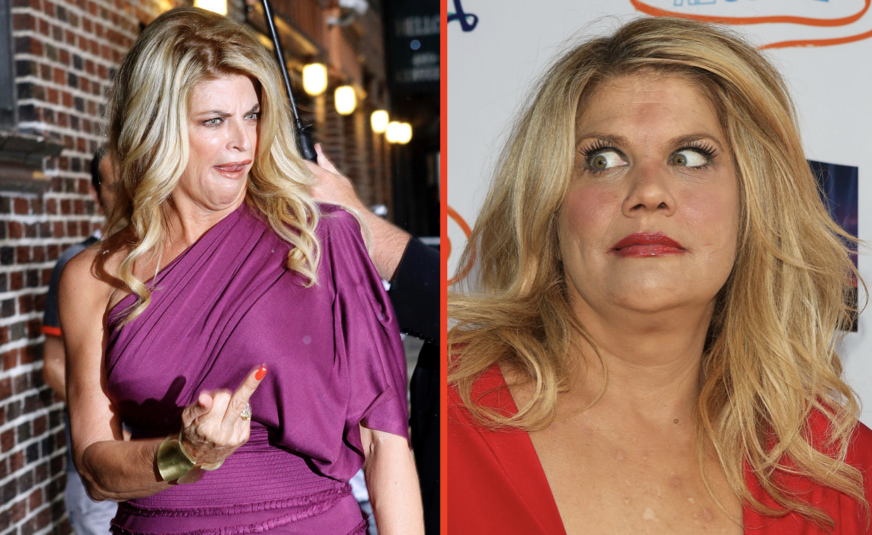 Former-actress-turned-homophobic-MAGA-troll Kirstie Alley died this week after a short battle with cancer, and suddenly character actress/LGBTQ ally Kristen Johnston is having a renaissance. At least, on Twitter.

Even though she’s 16 years younger than Alley, people have been confusing 55-year-old Johnston for the late Masked Singer contestant all week.

Related: Gay Twitter™ has thoughts on Kirstie Alley, whose anti-LGBTQ tweets will live on even after her death

Johnston has appeared in a number of films over the years, including Austin Powers: The Spy Who Shagged Me, Ice Age, Bride Wars, and Hurricane Bianca 2: From Russia with Hate. But it’s her TV work that she’s probably best known for.

She won two Primetime Emmy Awards for Outstanding Supporting Actress in a Comedy Series for her role as Sally Solomon in 3rd Rock from the Sun in both 1997 and 1999. Then there’s her guest appearance in Season 6 of Sex and the City.

Related: Gay Twitter™ has thoughts on Kirstie Alley, whose anti-LGBTQ tweets will live on even after her death

In the episode titled “Splat!”, Johnston plays Lexi Featherston, an aging party girl who has grown disenchanted with New York’s social scene and declares she’s “so bored I could die” before promptly falling out of a window.

Which leads us back to Alley.

In posting about her death this week, many on Twitter mistakenly thought it was she, not Johnston, who fell out the window in the iconic SATC scene…

rip to a legend ?? pic.twitter.com/wEfTnUWheh

not me thinking it was kristen johnston who died lmao

I have to confess, I’m one of those who until yesterday confused Kristen Johnston with Kirstie Alley. I loved Third Rock From The Sun. pic.twitter.com/K4mWXtqpmV

Others were quick to point out that the women are, in fact, two different people, and that Johnston is a much kinder person, whose been a guest judge on Rupaul’s Drag Race and doesn’t think LGBTQ+ people are pedophiles…

Gays, this is not Kirstie Alley.

The important thing is Kristen Johnston is ok

Other are using the moment to remark on Johnston’s greatness. Some have even begun campaigning for her to be on the next season of HBO’s White Lotus which, honestly, needs to happen…

The best thing to come from Kirstie Alley dying is everyone remembering what an icon Kristen Johnston is! Btw she is not a Trump supporter and she is an absolute legend. pic.twitter.com/qjOdSMDJk7

put kristen johnston in the next white lotus season NEOWWW

For your appreciation: send Kristen Johnston to White Lotus pic.twitter.com/beyCvWu31c

i would absolutely watch a kristen johnston career documentary, like in THEATERS https://t.co/4QI05EdDtP

This isn’t the first… or second… or third time this unfortunate mixup has happened.

In 2020, Johnston had to issue a public statement telling people she’s not Alley after they kept confusing her for the pro-Trump troll in public.

Omg you guys I’m not Kirstie Alley!!!!! Stop yelling at me! ? pic.twitter.com/TRXtHPHoXO

My friend Grace just sent me this ? pic.twitter.com/doeVXugmeI

Joking, politics, and, yes, even her homophobia aside, we hope Alley has finally found some peace. We also hope Johnston uses this opportunity to mount a long overdue career comeback. Your move, Mike White.

Related: ‘The White Lotus: Sicily’ goes full frontal, introduces us to Niccoló and his giant… pupils