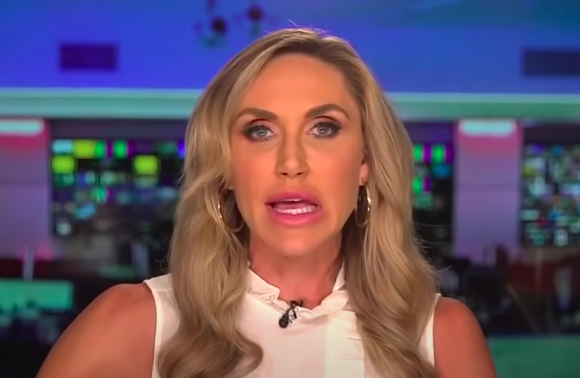 First Lady Dr. Jill Biden appears on the August edition of Vogue, an honor that was never offered to former FLOTUS Melania Trump, and nobody’s more pissed off about it than… Lara Trump?

Lara went on Fox News yesterday to complain about how her mother-in-law, who was a once aspiring model, was snubbed by the iconic fashion magazine despite being the “most beautiful first lady” in all of history.

“It’s too bad that we didn’t have a first lady who was a model, who was incredibly fashionable, who they could put on the cover of Vogue when Donald Trump was in office,” she griped. “Oh wait, we did! It was Melania Trump!”

Lara went on to say that the only reason Dr. Jill is being featured on the cover and Melania never was is “because these people are so obsessed with hating Donald Trump.”

“They are so woke that they could not bring themselves to put an incredibly beautiful woman,  I would say the most beautiful first lady we ever had, Melania Trump, and probably rivaling Jackie Kennedy’s fashion sense.”

Sounds like the only person obsessed with anything here is Lara. But we digress.

According to Lara, “every first lady” has appeared on the cover of Vogue and Melania was entitled to the same honor but the magazine snubbed her because “they hate him so much.”

“And you know what? I think it really hurt them,” she added. “People very clearly see their bias, they see where they stand now. And I am going to guess that they have lost quite a bit of readership due to the fact that they have taken such a strong political stand.”

As usual, of course, what Lara Trump said was not true.

First, “every first lady” has not appeared on the cover of Vogue. Some have. Others haven’t. But more importantly, Melania was offered a profile in the magazine but she refused to participate when she wasn’t guaranteed the cover, according to her former senior adviser and BFF Stephanie Winston Wolkoff.

Winston Wolkoff, who coincidentally worked at the magazine for several years before getting into politics, claimed in her book Melania and Me: The Rise and Fall of My Friendship With the First Lady that the fashion magazine tried scheduling an Annie Leibovitz photo shoot with Mrs. Trump, but she told them to “Forget it!”

Secretly taped recordings of Melania bitching about Vogue leaked last year. In them, she could be heard saying, “Vogue said, like, oh we want to do a profile. F*ck you profile! I don’t need a profile. Yeah, what I need another profile?”

The reason First Lady Dr. Jill Biden is on the cover of Vogue, is because she's admired worldwide.

Melania is racist birther and is despised worldwide. Plus, no one cares about your conniption fit considering you stole millions from shelter dogs.

Dear Lara Trump: the vast majority of Americans want nothing to do with anything Trump.

America's just not into you.

Based on the rallies I’ve seen, I don’t think Vogue is on many MAGA’s coffee tables. I think they’ll be fine.

Congrats Lara Trump, you made the cover… pic.twitter.com/nk8ecokitB

Melania wasn’t on the cover of Vogue because she refused to do interviews.

She did no interviews so she got no covers.@LaraLeaTrump knows this. But great distraction from the crime family business going under because of tax fraud.

Heh Lara Trump
Melania was not snubbed by Vogue. It's just that they only print things of interest. pic.twitter.com/ZzwfKvOqdg

First Ladies who've not been on the cover of Vogue:
– Melania Trump

I heard @LaraLeaTrump was pouting about Jill Biden on #VOGUE -someone forgot to teach her that beauty comes from the inside. #BeBest

Yep. It’s official, just did it just now. You’ve inspired me to subscribe to @voguemagazine, @LaraLeaTrump. Thanks for that insightful and not at all embarrassing rant. pic.twitter.com/DVR5gCXRPz