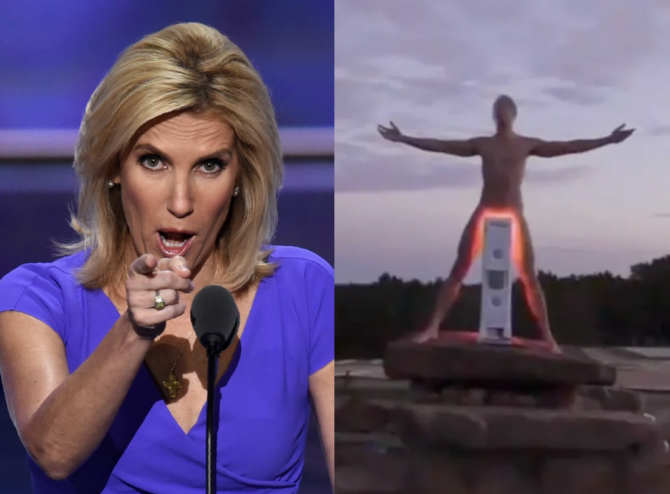 Yesterday, Curtis Ingraham took to Twitter to troll his homophobic sister by posting the trailer from Tucker Carlson‘s weird new documentary The End of Men that depicts shirtless guys wrestling with one another, squeezing milk from cow teats, and tanning their testicles.

“Hey Laura, what do you think of your colleague’s new video?! It must rattle your anti-gay agenda to no end,” he wrote.

Hey Laura, what do you think of your colleague’s new video?! It must rattle your anti-gay agenda to no end. @IngrahamAngle @TuckerCarlson @NikkiMcR https://t.co/GsOp3pXqIa

In another tweet, he posted a clip of Carlson interviewing “fitness professional” Andrew McGovern about “testicle tanning” and then pointed out the hypocrisy of Laura, who claims to be a devout Catholic, hawking crosses on her website while maintaining a friendship with a guy who peddles in such homoeroticism.

“And my sister sells crosses on her website?! Whaaaattt?!?!” Curtis wrote.

And my sister sells crosses on her website?! Whaaaattt?!?! @IngrahamAngle @TuckerCarlson @MollyJongFast https://t.co/5THyGnVoHM

In 2014, Laura teamed up with McVan jewelers to hawk cheap four way Catholic crosses on her website and at Sears. The gold necklaces were tacky replicas of a similar one she purchased at the Vatican years earlier that was stolen when somebody rifled through her bag at the Newark Airport in 2011 and pocketed $11,000 worth of jewelry. 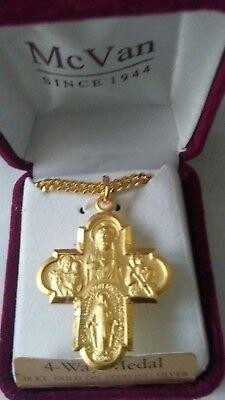 This isn’t the first time Curtis has trolled Laura on Twitter. Last week, he slammed her for being a “Putin-loving monster” after she did a segment on her show accusing schools of grooming preschoolers to be LGBTQ.

This is rich coming from my Putin-loving sister who seems okay with children being killed in Ukraine. Looks like she has a new trope in hand to further rile and anger her followers. What a monster! @IngrahamAngle https://t.co/KLeG8osGiP

And last month, he criticized a report she did about Florida’s “Don’t Say Gay” bill, during which she claimed schools wanted to “sexually brainwash” children, saying she harbors a “deep-seated anger” and has the “credibility of a tabloid.”

In the past, Curtis has also called Laura “nauseating” and suggested she is soulless. Speaking to the Daily Beast in 2018, he said, “She’s very smart, she’s well-spoken, but her emotional heart is just kind of dead.”

Laura hasn’t commented on her brother’s latest remarks or Carlson’s new documentary. Instead, she’s been busy cheering about the end of mask mandates on planes after a Trump-appointed federal judge in Florida ruled against the CDC yesterday just as the U.S. appears to be heading into yet another COVID-19 surge, with cases rising nationally and in most states after a two-month decline.