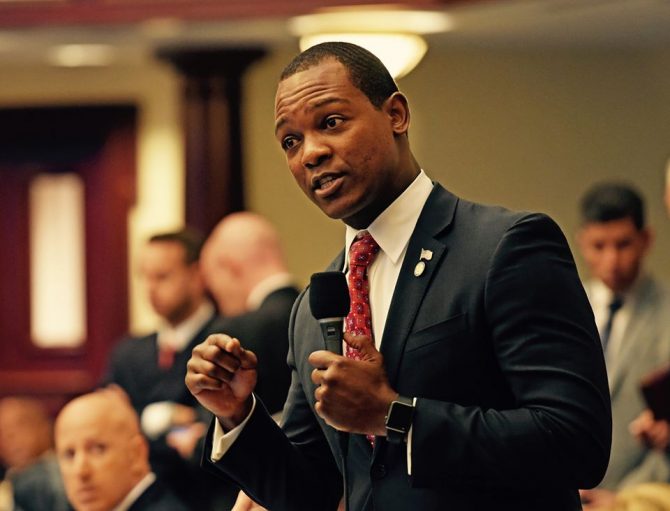 A Florida state lawmaker with a history of using antigay slurs is denying the most recent accusations of homophobia being lodged against him.

State Rep. Al Jacquet says he never called into a local radio station to trash his primary opponent, Commissioner Omari Hardy, and accuse him of being gay.

Both Jacquet and Hardy are Democrats.

Last Thursday, Hardy tweeted that someone informed him Jacquet had phoned into Sak Pase FM to discourage voters from listening to his campaign ad that had just played, calling it “gay.”

A Haitian-American supporter called me this morning and informed me that he heard my ad on Haitian radio yesterday, and that Representative Jacquet called the radio station after my ad was played and told listeners to disregard my radio spot because it was a "gay" spot.

He followed that up with a second tweet, saying: “This is the second time that he has slurred me, and being as he received a slap on the wrist for slurring me before, I imagine that he saw little downside to slurring me again.”

This is the second time that he has slurred me, and being as he received a slap on the wrist for slurring me before, I imagine that he saw little downside to slurring me again.https://t.co/xbuoS1S9Qx

In a letter, Sak Pase FM said: “Our station airs paid ads for small businesses throughout this region as well as political ads. We would not jeopardize the integrity of this station to allow someone to disparage one of our paid customers in such a negative way.”

In an email to supporters, Jacquet called the whole story a “lie.”

“Members, you may have heard about, and sadly some of you reacted to, a lie told by an opponent in my current re-election campaign,” Jacquet wrote. “But even more disturbing, some of my colleagues seized upon this fake third party hearsay and went as far as to make public statements based on pure ignorance.”

Earlier this year, Jacquet was caught on video calling Hardy a “batty boy,” a derogatory term used against gay people in the Caribbean.

After receiving backlash for the slur, Jacquet issued an half-hearted apology explaining it was said in the “heat of the moment” and apologizing to anyone who was offended.

Hardy, who as raised in a same-sex household, responded by saying he was “appalled” by Jacquet’s use of the term and labeling him a bigot.

“While I am not gay, I was raised in a same-sex household by my two mothers, and I am offended for them and for the broader LGBTQ community here in Palm Beach County, where I serve,” he said. “Bigoted rhetoric has no place in our politics–none, whatsoever.”

Of course, the easiest way to find out whether Jacquet did, in fact, phone into the radio station last week and call Hardy gay would be to find the recording of the broadcast. It has to exist somewhere.

Related: WATCH: Bigoted politician sounds like a fool when trying to defend his antigay views