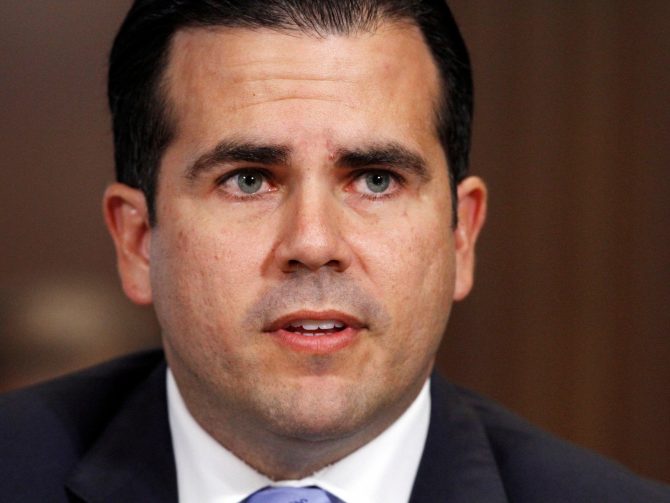 Puerto Rico Governor Ricardo Rosselló is facing calls for his resignation after a local media outlet published almost 900 pages from a leaked private group chat revealing homophobic, misogynistic, and other vile remarks written by him and his cronies.

Among the homophobic remarks are jokes about people’s sexualities and repeated use of the word “c*cksucker,” as well as the terms “unprecedented c*cksucker” and “historic c*cksucker levels.”

In another message, Rosselló takes aim at Puerto Rican singer Ricky Martin, writing: “Nothing says patriarchal oppression like Ricky Martin. Ricky Martin is such a male chauvinist that he f*cks men because women don’t measure up. Pure patriarchy.”

Responding to a picture of a woman wearing a t-shirt that reads “Antipatriarchy, Feminist, Lesbian, Trans, Caribbean, Latin American,” Rosselló says, “That must be some type of record, isn’t it?”

A roundup of the leaked texts can be found here.

Mr. Rosselló, 40, apologized on Thursday after an excerpt from the chat was first published by local media showing he had referred to Melissa Mark-Viverito, the former speaker of the New York City Council, who was born in Puerto Rico, using the Spanish word for “whore.” In English, he also used a profane expression in reference to the oversight board that controls Puerto Rico’s finances, followed by emojis of a raised middle finger.

Representative Jenniffer González-Colón, Puerto Rico’s nonvoting member in Congress, said Rosselló should forget about seeking re-election in 2020 and instead “immediately reflect on his role as governor.”

Meanwhile, Puerto Rico’s Senate president and House majority leader, who are both members of Rosselló’s party and who were both targeted in the group chat, said they no longer have faith in him as governor.

And Ricky Martin responded over the weekend by tweeting: “We CANNOT allow our Puerto Rico to be in the hands of such ‘leaders.’ … Do an act of true generosity, worth and love for Puerto Rico and give your position to another person with the wisdom and leadership to direct your destiny as a people.”

For his part, Rosselló, who affiliates himself with the Democratic party, says he has no plans of resigning and instead spent the weekend at church seeking forgiveness. He also says that he wrote the messages at a stressful time when he was working 18 hour days and it was simply his way of “venting.”

But this is just one of many controversies surrounding Rosselló at the moment. His administration is currently under investigation for how it spent government dollars following Hurricane Maria in 2017. Just last week, the FBI arrested two of his former top officials on fraud charges involving more than $15 million in federal funds.